(ten trillion Zimbabwe dollars worth about 4 cents in US currency)

The government of Zimbabwe is converting all Zimbabwe dollars into U.S. dollars. It will then remove all Zim dollars from circulation. The economy has functioned on South African rands and American dollars since 2009.

The reason for getting rid of their currency?

6/11 – Bloomberg – 175 Quadrillion Zimbabwean Dollars are Now Worth $5 – The government of Zimbabwe is removing their currency from circulation. They are closing all bank accounts denominated in Zimbabwe dollars. The South African rand and the US dollar replace existing currency.

The exchange rate for notes printed before 2009 will be US$1 for 250 trillion Zimbabwe dollars. Bills printed after that date will be exchanged at $US5 for 175 quadrillion dollars.

If I understand correctly, that means the 250T rate applies to physical bills and the 175Q (is that the correct abbreviation for quadrillion?) rate applies to bank deposits.

That means you would get US$0.40 for every Zim$100T currency you turn in. Picture at the top of this post is 10T, so ten of those can be exchanged for 40 cents.

Now, imagine using Zim dollars to pay for dinner out with your spouse.

Look at this relationship:

If you had deposited some currency in your bank account back in 2008 or 2009 and let it sit until today, you would have lost 99.86% of your money to inflation.

I need to do more research on the history of exchange rates. I recently bought some Zimbabwe dollars to show the destruction. Here is a visual story of my research so far:

2008 – This is when the hyperinflation shredded the economy. Exchange rate exploded to 6,723,052,073.  Nearly 7 billion. Not sure what date in the year that was, because the exact date and whether it is the morning or afternoon matters. Let’s just go with the 6.7 billion. At that rate, the following 5 billion note was worth about 75 cents. Would take half a million of the 10,000 notes to equal this. Half a million. 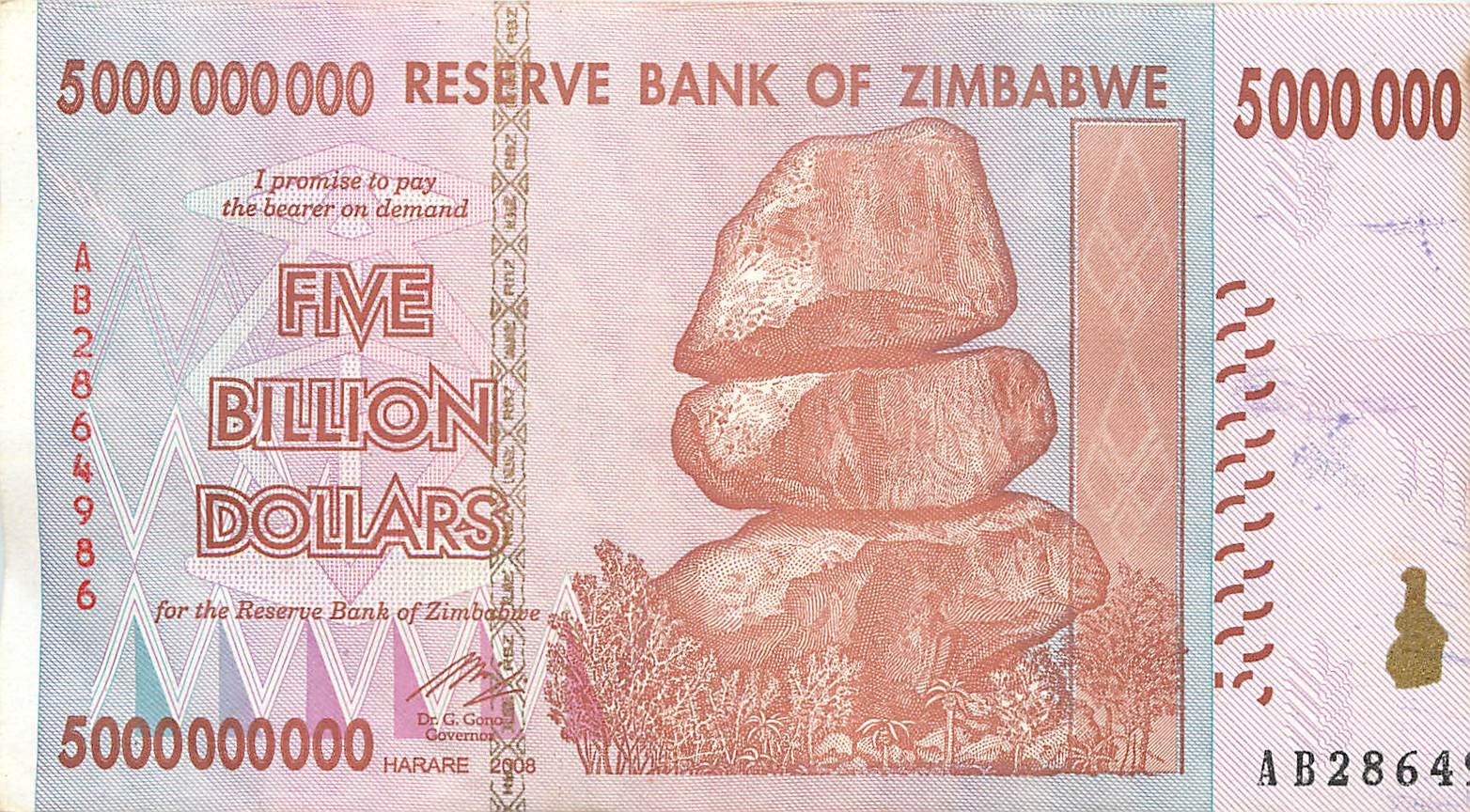 2015 – 250 trillion to one at the rate the government is paying to remove all currency from circulation. At that rate, the largest bill in circulation, 100 trillion, is worth 40 cents. The following bill, at a mere 10 trillion Zimbabwe dollars, is worth 4 cents. Would take 2,000 of the previous bill to equal this  one worth 4 cents, or 37,500 to still be worth the 75 cents value back in 2008.

To show the complete obliteration of value, let me recap the bills it would take to retain value of something in the range of a US dollar with the bills above:

First, this is a story of the devastation caused to the overall economy. Everyday people are completely destroyed financially when government policies let hyperinflation loose.

Second reason I’m interested is that I did a field audit at the Zimbabwe office of a charity many years ago and thus have a little bitty awareness of that beautiful country. I grieve for the mass suffering caused by government induced hyperinflation.

One thought on “This is what hyperinflation looks like”