Total production of oil in North Dakota in 2018 set a record as did the average daily production.  Prices have recovered from their low which means the value of that production is going up but not yet close to setting a record.

All of the following data is from a spreadsheet I maintain, with the raw data pulled from various reports published by the North Dakota Department of Mineral Resources. 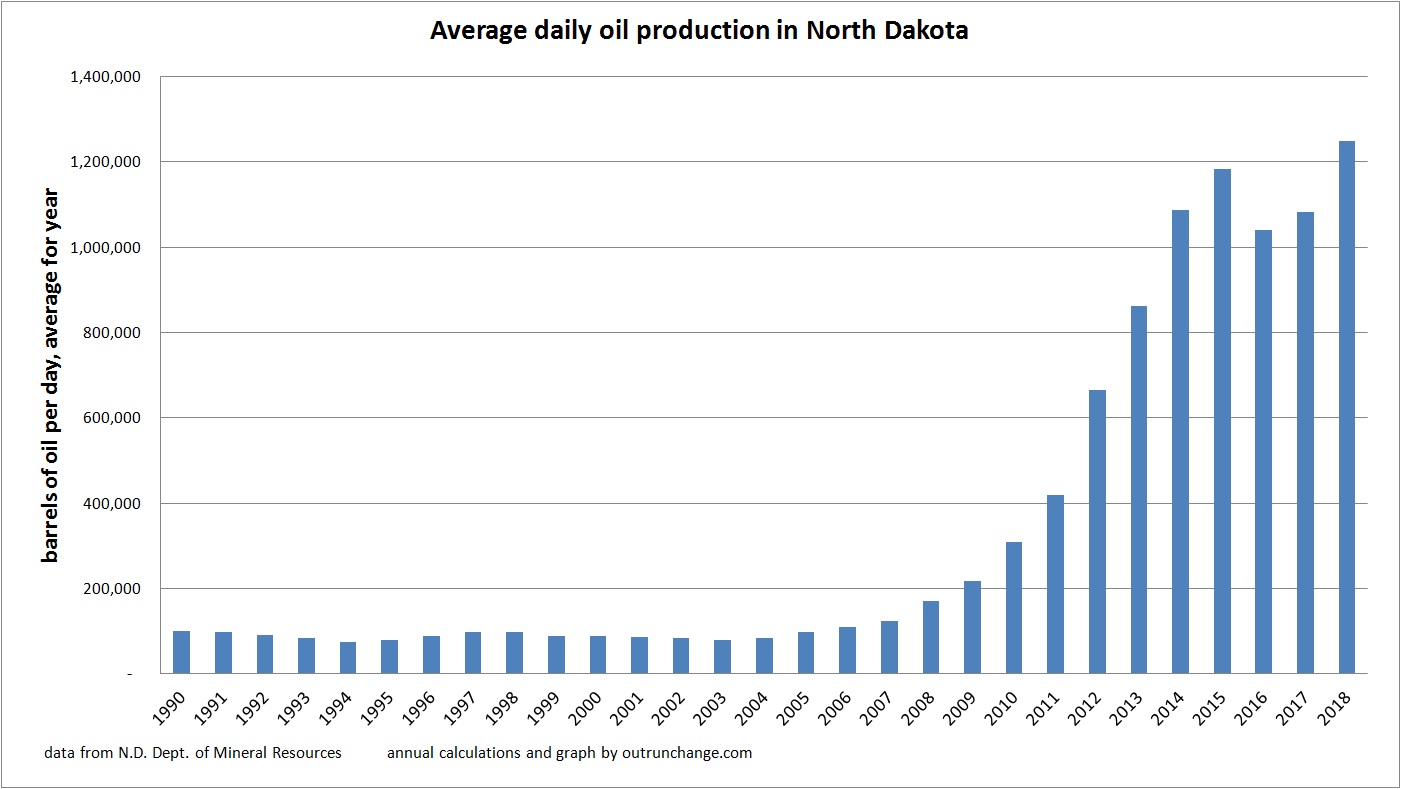 Total production over the years:

END_OF_DOCUMENT_TOKEN_TO_BE_REPLACED

Output fell to a low of 942,322 bopd in December 2017. Output then started rising with a typical slowdown in winter of 2017/2018.  After the winter lull production again climbed.

In 2018, producers in North Dakota broke the record level of production six times in the last eight months. The record-breaking months:

END_OF_DOCUMENT_TOKEN_TO_BE_REPLACED

That suggests price stability in the range of $45 to $55 will keep the rig count around the current level of 57.

The rig count has been in the high 50s for the last few months. It seems to have stabilized since spring 2017 and is up substantially from the low. Remember that the rig count today does not compare to the rig count a few years ago because drilling rigs today are far more productive than just two years ago.

Here is the view of monthly rig count:

What is the value of the crude produced at the average sweet price in the state? Check it out:

END_OF_DOCUMENT_TOKEN_TO_BE_REPLACED

A few articles that caught my interest over the last months on energy issues:

On 7/12 Talos Energy announced the “Zama-1” exploratory well has confirmed a new find which is estimated to hold between 1.4 billion and 2.0 billion barrels of oil-in-place.

Oil that can now be pulled from under the ocean to provide energy to a fuel-hungry world.

END_OF_DOCUMENT_TOKEN_TO_BE_REPLACED

How Not to Land an Orbital Rocket Booster – Elon Musk posted a video of failed launches. You might call this a blooper reel. I prefer to call it:

As you chuckle at the failed recoveries, keep in mind SpaceX has recovered 16 boosters, reused 2 of them, and has recovered 2 Dragon capsules, having already reused 1.

That, is rocket science.

9/22/17 – Behind the Black – Soyuz launches Russian GPS satellite – In the fun-to-watch race for most launches in 2017, Russia now has a slight lead over SpaceX.

END_OF_DOCUMENT_TOKEN_TO_BE_REPLACED

The impact of fracking is massive. Large increases in production of natural gas and crude oil has created a long list of favorable economic and environment impacts.

7/6/17 – Victor Davis Hanson at National Review – The Fracking Industry Deserves Our Gratitude – Prof. Hanson provides a fast survey of how much fracking has improved the American economy. Fracking is the combination of horizontal drilling with hydraulic fracturing.

The impact of fracking is staggering.

Ten years ago eeeeeeverybody knew for an absolute certainty that Peak Oil was here and we were about to run out of oil. The Secretary of Energy was wishfully musing that gasoline would rise from $4 to $10 a gallon.

In the last five years, gasoline prices are down about $1.50 a gallon, surge in natural gas production displaced coal consumption which has reduced our CO2 output by 12% in the last decade (surpassing the EU in cuts), and reduced our oil imports by five million barrels a day.

Let me rephrase that part about CO2…

END_OF_DOCUMENT_TOKEN_TO_BE_REPLACED

Amazing new services and products arising from the technology revolution are a delight every day. We are all benefiting from astounding stuff. Tons of entertainment options on the ‘net. Astounding capabilities for our smartphones.

The downside is companies that can’t keep up are getting swept away. The people and space involved in old stuff can be reused in new services. That is creative destruction.

5/31/17 – Fortune – RadioShack’s Tweets Offer a Bleak Look Into the Retailer’s Demise – Over Memorial Day weekend, RadioShack had a liquidation sale at over 1,000 of its retail stores. After closing those locations, there will only by 70 corporate owned stores and 500 dealer owned stores left.

Sales dropped from a peak of $6.3B in 1996 to only $3.5B last year, due to the company not being able to counter the shift to on-line sales.

Consider the missed opportunities, from a comment by Stephen Green at Instapundit:

END_OF_DOCUMENT_TOKEN_TO_BE_REPLACED

6/3/17 – I got home about two minutes after the Falcon 9 was successfully recovered. Watched the archived copy of SpaceX’s CRS-11 launch of a re-used Dragon to resupply ISS.  The Falcon 9 booster was also reused. This is the 5th recovery of Falcon 9 on land and the 11th recovery in total. Awesome.

Made note of a fun tidbit of trivia. The booster and payload went from 0 to 1,002 km/h in 60 seconds on the way up. On the recovery the Falcon 9 booster went from descent speed of 1,119 km/h to zero in the last 29 seconds.

Pause for a moment and consider the staggering results.

END_OF_DOCUMENT_TOKEN_TO_BE_REPLACED

Here is a variety of news tidbits I’ve noticed lately from Bakken:

4/14/17 – The Million Dollar Way – New Airport Work to Begin Next Week – Official groundbreaking ceremony was in October 2016. The start of massive grading and site work starts the week of April 17, 2017.

He expects aggressive drilling in the summer, after a lull in the spring due to load restrictions.

END_OF_DOCUMENT_TOKEN_TO_BE_REPLACED

There is a non-stop stream of amazing news from the open frontier of space:

5/1/17 – Space.com – SpaceX Launches US Spy Satellite on Secret Mission, Nails Rocket Landing – SpaceX successfully put a classified satellite from National Reconnaissance Office into orbit. As a massive fringe benefit, they also recovered the first stage back at the launch site. This is their fourth successful recovery on land.

The photograph from the launch is incredible. In particular, there is a great view of the first stage separation, flip, and boostback burn.

Here is a clip on Instagram, posted by Elon Musk:

END_OF_DOCUMENT_TOKEN_TO_BE_REPLACED

The number of private sector players involved in space exploration and the progress underway is astounding. Here are a few recent articles catching my attention:

3/20/17 – Investor’s Business Daily – There’s a New Space Race On, Courtesy of Elon Musk, Jeff Bezos And The Free Market – The main point of the article, which is barely starting to be noticed:

Space remains the final frontier. And it will be private sector entrepreneurs, not government bureaucrats, who will take us there.

Article gives a summary of the private sector companies, funded by filthy rich guys who choose to pour their wealth into space exploration, that have expanded our reach into space. According to the article, these companies have done more than NASA has in the last several decades.

END_OF_DOCUMENT_TOKEN_TO_BE_REPLACED

It is astounding to ponder the news from the wide open frontier of space. I’m continually amazed by what is happening.

3/7/17 – Space News- NASA seeks information on commercial Mars payload service – NASA issued a Request For Information asking for plans to provide cargo runs to Mars. They are looking for outline of plans in terms of payload mass and weight, nature of vehicle, and timing for start of operations. The RFI indicates 2020 as a start date.

Two companies are described in the article as likely players in Mars cargo runs.

SpaceX would use their new lander Red Dragon as testbed for cargo vehicle. Launch was scheduled for 2018 but has slipped to 2020.

Mars One also has plans for a lander, as an intermediate step for crewed travel. First launch was planned from 2018 but that is now looking like 2022.

3/14 – Behind the Black – SpaceX wins another Air Force launch contract – Ticket price to launch a GPS satellite is $96.5M, up by $14M from the last launch by SpaceX for USAF. Post speculates SpaceX is trying to improve their margin by undercutting ULA less this time around.

END_OF_DOCUMENT_TOKEN_TO_BE_REPLACED

A few more of the amazing things going on in the open frontier of technology:

The rounds are used for snagging a drone.

END_OF_DOCUMENT_TOKEN_TO_BE_REPLACED

The competition to be a commercially competitive space launch provider gets far more serious with SpaceX successfully launching a reused Falcon 9 booster to get SES-10 into a geosync orbit.

On the same day as SpaceX made such tremendous progress, two competitors dropped further behind.

I was so fortunate as to check my Twitter feed as SpaceX began its live coverage of the launch. It was such a joy to watch the successful launch and an even bigger thrill to see Main Engine Cutoff, which meant the reused booster did its job.