The rate of change we are seeing around us is massive. There are threats of automation or artificial intelligence even eating into what is called the white-collar world.

Here’s a suggestion on how you might cope with this overwhelming change:  Take on full responsibility for keeping your skills and abilities current.

(Cross-post from my other blog, Attestation Update.)

8/1/17 – Medium – Skill, re-skill, and re-skill again. How to keep up with the future of work. – The rate of change is accelerating and the skills needed to do work in the new economy are changing as well.

Article provides a brief summary of our education system. I will expand that with what I have learned elsewhere. Then I’ll mention a plan to dealing with this turmoil.

END_OF_DOCUMENT_TOKEN_TO_BE_REPLACED

1/28 – The Local, in Austria – Hotel ransomed by hackers as guests locked in rooms – A 4-star hotel got hit hard by cyber crooks, who locked the key-based door system. Every door in the place was locked Guests could neither get into a room or leave.

This was the third hit at the hotel. They successfully defended against a fourth attack.

Oh, the hotel has a plan to prevent future attacks…

END_OF_DOCUMENT_TOKEN_TO_BE_REPLACED

Several articles provide an in-depth view of the disruption taking place in several industries due to the IT revolution.

The question to ponder in the back of your mind is what are you going to do when this wave of disruption overturns your industry?

January 2017 – Vanity Fair – Why Hollywood As We Know It is Already Over – Looking for a good article on how technology is going to do to Hollywood what IT has already done to music and publishing? If so, this is what you’ve been looking for.

Check out the article to help understand the massive change surrounding us.

First, music and newspapers. The author saw his first indication the music industry would collapse when he started downloading music. Instead of driving to a store somewhere and spending $20 to get one song he wanted, he could spend a buck and get the song immediately.

Author says the music industry has shrunk by half in the last decade. Remember that is after the first round of disruption hit.

Next were the newspapers. For a long time, the web part of the New York Times was physically separate from the headquarters. “Banished” is the word the author used. At the same time, startups like Instapundit (yeah Professor Reynolds!) and DailyKos were figuring out how to blog. Then WordPress and Tumblr allowed anyone on the planet to start blogging, and doing so for free.

Author says a lot of people didn’t want to wander over to a newsstand and buy a whole newspaper or magazine when instead they could read the single article they wanted, online, for free.

To illustrate the concept, I’ve never bought a copy of Vanity Fair and doubt I ever will. I certainly didn’t drive over to Barnes & Noble to buy the current edition so I could read this article. A blogger I read (see above!) mentioned it and I clicked over.

The end result of the loss in audience?

END_OF_DOCUMENT_TOKEN_TO_BE_REPLACED

Here are a few more articles describing the cliff that newspapers are falling off of.

10/27 – New York Times – More Wretched News for Newspapers as Advertising Woes Drive Anxiety – At the time the article was written (late October), layoffs had already taken place in the Times and Gannett, with layoffs expected at the WSJ.

END_OF_DOCUMENT_TOKEN_TO_BE_REPLACED

Ponder the implications for how you look at the world:

When you have developed a perspective or opinion or conclusion on some issue after having thought through all the relevant factors, there is a serious danger that reaching such a conclusion leaves you thinking that anyone with a different perspective is incorrect.

If your carefully drawn, considered opinion is reasonable, then the inference is that other opinions aren’t reasonable.

END_OF_DOCUMENT_TOKEN_TO_BE_REPLACED

If you let an economy function, market forces will create pressures to smooth things out. The forces of supply and demand have an amazing ability to balance a temporarily unbalanced marketplace. Several recent articles illustrate this concept in North Dakota.

The oil is initially moved by either trucks or underground pipes.

END_OF_DOCUMENT_TOKEN_TO_BE_REPLACED

(Sarcasm alert!!!! Sometimes ridicule is the only way to deal with foolishness. I dislike sarcasm because it is an unhealthy, corrosive humor. However, there are times when pointing and laughing out loud is the right way to call attention to slanted, agenda-filled bias. Think of all those Hitler-in-the-bunker videos.)

Okay, here we go with the sarcasm…

I am so silly.  Ever since I started paying attention to economics back in high school, I thought we wanted to see a booming economy in order to make life better for people. If we could grow the economy, everyone everywhere would have more money and enjoy a better standard of living. Work-a-day average Joes would have better health, more comfort, and a nicer life. I thought that was our goal.

I was so wrong.

END_OF_DOCUMENT_TOKEN_TO_BE_REPLACED

The disruptive change around us is staggering. Yet I don’t see how it will disrupt my business, which is the auditing sector of public accounting. Before I get into that, here are a few more articles on the change going on around us.

Just in case you are wondering what digital disruption looks like, check out this graph of newspaper ad revenue for the last 65 years, adjusted for inflation: 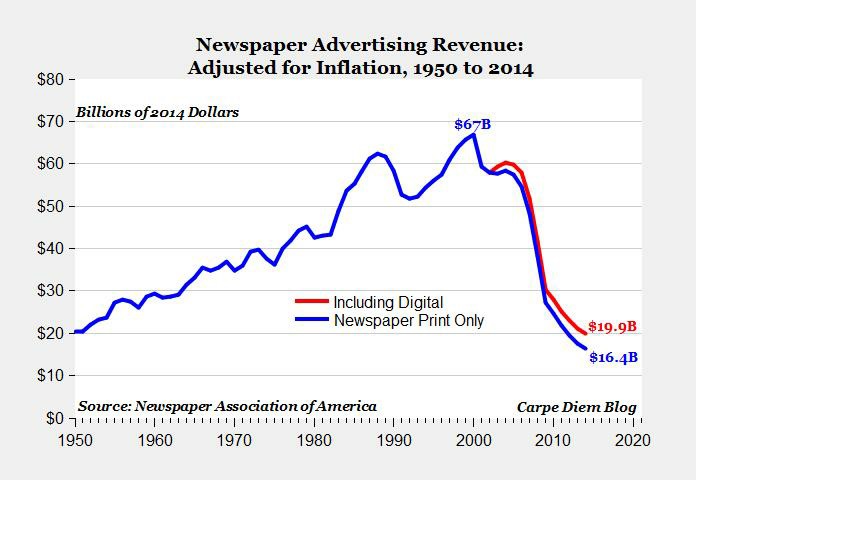 4/30 – Carpe Diem – Creative destruction: Newspaper ad revenue continued its precipitous free fall in 2014, and it’s likely to continue – Above graph is from this article, which points out that print advertising has dropped 57% in six years and is down 75% from the 2000 high 14 years ago.

Adding back digital advertising puts the volume of advertising essentially at the same level as in 1950 when adjusted for inflation. Phrased differently, it took 50 years to go from $20B to $67B and merely 14 years to lose all that growth.

END_OF_DOCUMENT_TOKEN_TO_BE_REPLACED

Here’s a few more articles on Bakken I found interesting – adjusting to growth and drop in crude oil prices. How would you handle calls for police service increasing by a factor of 180 over the last 8 years?

1/9 – Oil Patch Dispatch – Record number of births reported in Oil Patch in 2014 – Along with the huge number of workers moving to North Dakota, there is another year of record baby births.  Main hospitals in Minot, Williston, and Dickinson report increases of 5%, 7%, and 13% respectively.

END_OF_DOCUMENT_TOKEN_TO_BE_REPLACED

“I will not give in to despair because hopeless should never win and hopeless is a lie.”

Former pastor Jay Reinke, as the Overnighters program shuts down.

I agree. Hopeless is a lie. Despair is a lie.

“The problem is we’re working with sinners and some people are fearful.”

Andrea Reinke, as the family discusses complications of helping someone who is a registered sex offender.

Those are two of my favorite lines from the movie “The Overnighters”, which I watched for the second time last night.

As Mrs. Reinke pointed out, everyone you will ever deal with is a sinner.

That concept has lots of implications. The movie does a superb job illustrating that concept. Consider:

Another part of my effort to explain that while I see radical change on the horizon in other areas, I have a blind spot how those things will affect auditing.

1/19 – Mark Mills at Forbes – The Mobile Revolution Has Only Just Begun – Look again at the radical change in the last century:

Not only have radios become cheap but they’ve collapsed in size while rising in capability. A trailer-pulled radio that weighed one ton in WWI is now a chipset weighing a fraction of an ounce buried inside a smartphone that can handle one million-fold more traffic than those first Marconis.

Combine that with a computer the size of a phone and you have a smart phone.

END_OF_DOCUMENT_TOKEN_TO_BE_REPLACED 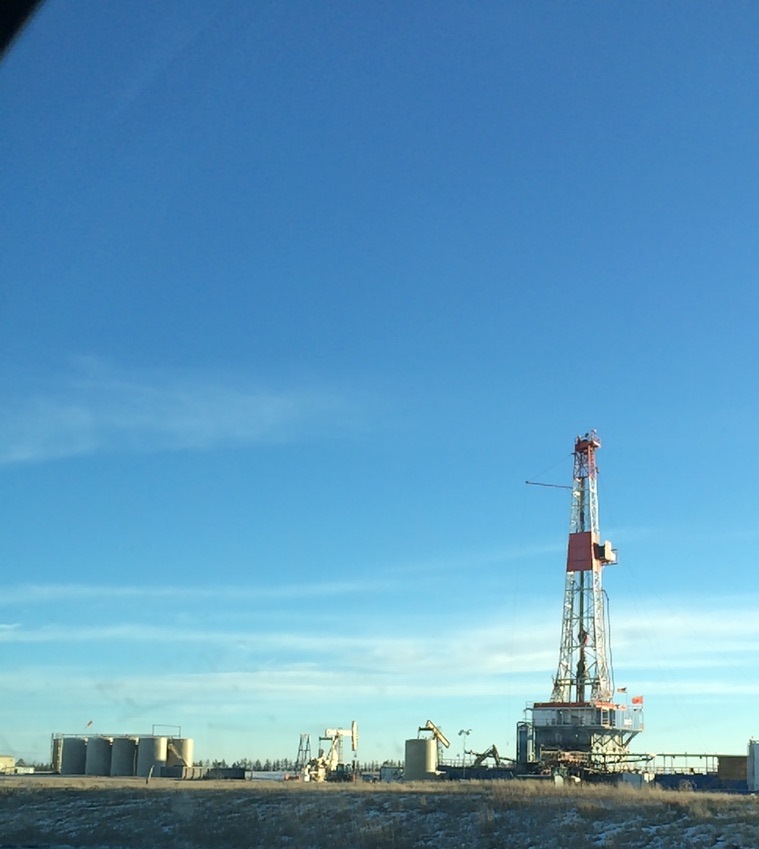 Still lots of great stuff going on in the Bakken. Flaring is way down.

How would you cope with the population of your city increasing to ten times larger than it was a decade ago?

The two best articles I’ve read that explain the massive shifts we are seeing in the economy were from Walter Russell Mead back in June 2011. Those articles put much in perspective and give a hint at a way forward. They were foundational to me starting to focus on the radical change taking place all around us.

The Death of the American Dream I compares the painful transition away from family farms to a suburban home funded with a cheap mortgage and paid by working a life-time job. We are now transitioning away from the model that has been in place since everyone reading this was a child. It will be painful, just as the disappearance of the family farm was painful.

END_OF_DOCUMENT_TOKEN_TO_BE_REPLACED

Previous posts introduced the simple/complicated/complex/chaotic quadrants of the Cynefin Framework and discussed how that can be used to analyze development issues.

(This discussion is cross-posted from my other blog, Nonprofit Update. I’ll put them on this blog as well because the Cynefin Framework is quite helpful for understanding the messy world around us.)

This framework has huge implications for discussions of economic issues. So many areas come to mind that are actually complex but we treat them as if they are complicated.

If this is a complicated issue, then to make life better for people, we can just increase the minimum wage. Go to $8. Maybe $10.

END_OF_DOCUMENT_TOKEN_TO_BE_REPLACED

The Telegraph has a full length article on Boomtown, USA. In addition to a great feature in words, there are 9 videos, of about 2 minutes each.

The upside of the oil boom is incredible. Lots of guys are making $100K to $150K by working hard doing difficult work.  The article guesses there are 10,000 men living in crew camps. Each of them is making, by my guess, between $70k and $125K a year.

My guess is most of those guys would be making $40K to $70K if they were working back home. Assuming they even had a job. Most of them wouldn’t.

Business is booming. Consumer stores are crowded. Construction is going as fast as the city can permit projects.