Here are three more stories in just the last week proving yet again the foolish of Malthusian thinking. The experts in a field have no clue, absolutely no clue, of the total amount of any resource available on this amazing planet. Whether it is water, crude oil, or helium, the experts don’t know what previously unknown field they will find next.

7/1 – The Million Dollar Way – Peak Oil? What Peak Oil? Huge Discovery For Hess, Exxon; $70 Billion at Current Prices – This post points to an article at Yahoo: Exxon Might Have Just Made The Largest Oil Find In Two Years.  ExxonMobil and Hess Corp are in a joint venture that just discovered a huge field in deep water 120 miles off the coast of Guyana.

The new field, called Liza, likely has somewhere between 800M and 1.4B oil-equivalent barrels. Yeah, that’s somewhere in the range of one and a half billion barrels of oil. That nobody knew about. Until now.

To put this in context, there have been only five brand-new discoveries in the last four years with recoverable amounts of over 500M barrels. Only five? ONLY? To my little brain that is astounding.

END_OF_DOCUMENT_TOKEN_TO_BE_REPLACED

Million Dollar Way pointed me to a great visual illustration of this idea, explained by the US EIA:

For many purposes, oil and natural gas resources are usefully classified into four categories:

Check out this illustration, which is obviously not to scale: 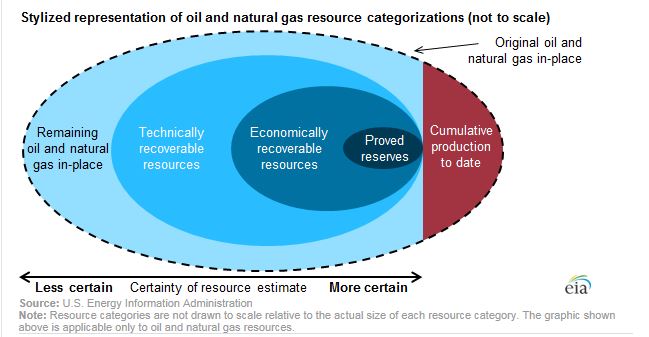 Illustration tells the story better than my words could.

If exploration of the third shelf of Three Forks had been completed instead of just started,

if exploration of fourth shelf were done instead of *not* started,

END_OF_DOCUMENT_TOKEN_TO_BE_REPLACED

The USGS updated their estimate of the amount of oil that is undiscovered, technically recoverable in the Bakken field. Second paragraph of their press release says:

END_OF_DOCUMENT_TOKEN_TO_BE_REPLACED

Does oil just magically appear in a tapped out field or do the oil people learn how large the field really is, locate more oil, and develop new ways to get the oil out of the ground?

If you’ve read this blog for long, you know what I think the answer is.

Look at the monthly production data for the Bakken field, exclusive of wells elsewhere in North Dakota. You can find the data here. This data is for the Bakken, Sanish, Three Forks, and Bakken/Three Forks pools only.

END_OF_DOCUMENT_TOKEN_TO_BE_REPLACED

I’ve come across a term that struck me as silly as soon as I read it – peak oil – That’s the idea that we’ve hit the maximum production and we will soon see production levels fall and then run out of oil.

The definition of proven reserves and a minimal knowledge of supply and demand makes it so obvious that we will never run out of oil.  A glance at this blog or the blogs I cite should make the concept of peak oil laughable.

I need to explain this across several posts.

The whole concept of peak oil becomes more astoundingly ignorant with every additional paragraph I read on the issue. Conceptually, there is a big problem. Practially, developments in the last couple of years should kill off the concept permanently.  END_OF_DOCUMENT_TOKEN_TO_BE_REPLACED

The astounding news just keeps on rolling in.  Here is another name to remember for energy issues – Green River.

Testimony to Congress this week from OMB’s Anu K. Mittal, Director, Natural Resources and Environment, indicates there are tremendous opportunities and challenges from oil shale underneath western Colorado and eastern Utah.

The Green River Formation has an astounding amount of oil shale.  From the report’s summary:

Tapping the vast amounts of oil locked within U.S. oil shale formations could go a long way toward satisfying the nation’s future oil demands. Oil shale deposits in the Green River Formation are estimated to contain up to 3 trillion barrels of oil, half of which may be recoverable, which is about equal to the entire world’s proven oil reserves.

END_OF_DOCUMENT_TOKEN_TO_BE_REPLACED

I’ve mentioned the potential to see huge increase in oil and gas production in the U.S. in several posts. Start looking here, here, and here.

It’s not just the U.S. that could see huge increases in production. Check out these articles, courtesy of Carpe Diem:

New technology from the U.S. (that means fracking) could make large volumes of shale gas off the coast of UK economically viable, pushing England to the top of reserves worldwide.

Fantastic primer on energy in the U.S. and world:

Hard Facts – An Energy Primer from the Institute for Energy Research.

I’ve just started reading it.  Superb stuff.  The first few tidbits that  jump out at me:

Estimates that there is more recoverable oil in the U.S. than in Saudi Arabia:

The United States is home to the richest oil shale deposits in the world—estimates are there are about 1 trillion barrels of recoverable oil in U.S. oil shale deposits, nearly four times that of Saudi Arabia’s proved oil reserves.5

Vastly improved energy efficiency in the U.S. even with expansion in the per capita GDP:

Are we running out of oil and gas we know about and can get to at economical price?