A few more updates on the unintended consequences of alternative, unreliable energy sources.

Yet another massive problem with wind and solar energy. You cannot turn it off and on. As in, provide electricity when people decide they want it. That feature is called dispatchable.

Here’s the definition of the term:

END_OF_DOCUMENT_TOKEN_TO_BE_REPLACED

Several articles on the increasing number of slice-and-dicers in the state.

6/16 – Forum News Service at Bismark Tribune – N.D. utility regulators approve wind farm project – The state PSC approved the Brady Wind Energy Center I near Dickinson. There has been a lot of public opposition to the project for quite some time.

END_OF_DOCUMENT_TOKEN_TO_BE_REPLACED

I just learned that Robert Wilson (@CountCarbon) does a huge amount of graphing. (Yeah, yeah, I’m slow to catch up with what’s happening. On the other hand, keeping up with change is the purpose of this blog.)

Here are two of his illustrations that shows the utter foolishness of two specific energy policies: ethanol and solar power.

Question along with graph to help figure out your answer: 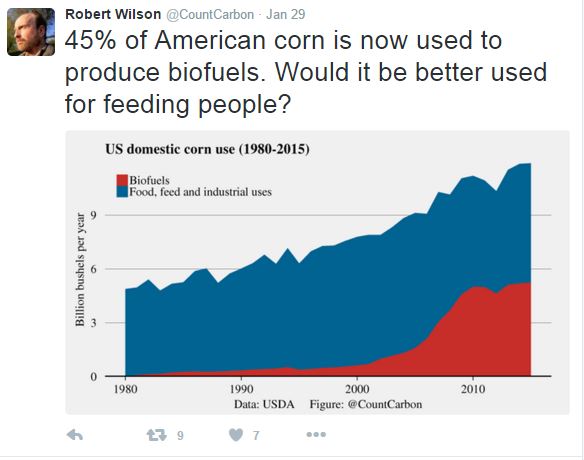 Question: Would corn be better used to feed people than cars?

END_OF_DOCUMENT_TOKEN_TO_BE_REPLACED

I have a backlog of energy articles. That allows me to group comments together. Today’s focus: the morality of ethanol assessed based on the damage it causes.

12/17/14 – CBS Minnesota – U of M Study Finds Ethanol Worse for Air Quality Than Gasoline – When measured at the tailpipe, ethanol-laden gasoline measures about the same as regular gasoline. Study from the University of Minnesota says that when you count all of the inputs to grow corn and turn it into ethanol it is far worse for the environment than plain gasoline.

END_OF_DOCUMENT_TOKEN_TO_BE_REPLACED

Articles on operation of salt water disposal sites, damage from ethanol, drones in the oil patch, and an interview with Chevron’s CEO (including comments on harsh over regulation in California).

The SWD sites have lots of tanks to let the saltwater settle. Oil floats to the top, is skimmed off, then sold.

END_OF_DOCUMENT_TOKEN_TO_BE_REPLACED

Here are a few recent articles that help me understand what is happening in the open frontier of energy. Two articles on the damage from ethanol and a view of Cowboyistan. Also cool pictures of North Dakota.

3/10 – Robert Bryce at New York Times – End the Ethanol Rip-Off – In addition to the environmental damage from tearing up grasslands, harm to poor people world-wide, damage to small engines at 10%, and damage to most car engines at 15%, burning corn to power cars is wasteful economically.

END_OF_DOCUMENT_TOKEN_TO_BE_REPLACED

A new study funded by the federal government reached the conclusion that ethanol made from residue after corn harvesting releases 7% more greenhouse gases that straight gasoline.

The reason for the surprise is that the study considers the ancillary effects of biofuels. For example, when the residual is left on the ground, it improves the soil’s ability to absorb CO2. When the increased CO2 from non-absorption into the ground is considered, biofuels make the environment worse.

You can read more:

END_OF_DOCUMENT_TOKEN_TO_BE_REPLACED

Update: Welcome to those arriving from Million Dollar Way. Hope you enjoy the read. There are plenty of other posts here on ethanol, energy in general, and especially peak oil foolishness. (Thanks for the link!)

It doesn’t compare to forcing the poor to pay lots more so they barely have enough food to stay alive, but there is another unintended consequence directly caused by turning corn into gasoline.

The loss of grassland has reduced the number of game birds, with a resulting drop in hunting and the associated slump in economic activity.

The Dickinson Press has a report:  Ethanol’s rise can mean loss of hunting lands.

It used to be that one particular motel in Fairbury, Nebraska would be packed every day of the week for the first two weeks of the pheasant season and then all weekend for several more weeks. Now, there are a few hunters that show up occasionally.

END_OF_DOCUMENT_TOKEN_TO_BE_REPLACED

The EPA has reduced the amount of ethanol that must be used in gasoline. The federal requirement is based on absolute volume of ethanol and not the amount of gasoline sold. Thus, even though gasoline use dropped instead of rising, the amount of ethanol has to increase. This would force us to use E15, which would damage many auto engines on the road.  The AAA asserts that only 5% of the light trucks on the market can use E15.  That linked article also says E15 actually has twice as much corn (ethanol) as E10.

A small victory for consumers who buy gas, everyone that owns a vehicle with an engine that otherwise would be damaged, and the poor who spend a disproportionate share of their income buying artificially high-priced corn.

END_OF_DOCUMENT_TOKEN_TO_BE_REPLACED

Million Dollar Way ponders The Irony Of It All – North Dakota Will Lose More Grassland, More Wetlands To Ethanol Than To The Oil And Gas Industry:

And with an ever-increasing number of slicers and dicers killing bats, eagles, hawks, and whooping cranes, the oil and gas industry is starting to look like an oasis of common sense.

END_OF_DOCUMENT_TOKEN_TO_BE_REPLACED

Cute cartoon from Nate Beeler in the Columbus Dispatch

The corn, it’s a poppin’

Yes, gasoline from corn does all that and more.

In what Million Dollar Way calls a Cronkite moment, the AP has a major story out, the title of which I will edit to make neutral as to political parties, since ethanol is the official policy of one R and one D administration:  The secret, dirty cost of {two administration’s} green power push.

Here’s a bit of the information the AP reported:

The consequences are so severe that environmentalists and many scientists have now rejected corn-based ethanol as bad environmental policy.

END_OF_DOCUMENT_TOKEN_TO_BE_REPLACED

When can we start calling it foolishness to burn corn in our cars?

Standards set by Congress require a certain amount of ethanol be used. Here’s the required amount this year compared to production and expected demand:

END_OF_DOCUMENT_TOKEN_TO_BE_REPLACED

You can distill the problem with burning corn in our cars into one cartoon. From Michael Ramirez at Investors Business Daily.

We are diverting increasing amounts of corn into ethanol which goes into our gasoline. That is driving up grain prices. That in turn is driving up food prices here in the U.S. and around the world.

And that at a time when our domestic oil production is going through the roof.

Carpe Diem reminds us of two older articles in More on the lunacy of turning corn into demon ethanol.

The first is from Slate, in July 2012 – Food as Fuel. The second is from far left economist Paul Krugman from April 2008 – Grains Gone Wild.

In the Carpe Diem post, Prof. Perry says that anytime you have Paul Krugman agreeing with fifteen named sources (including commentators from both left and right) that ethanol is a lousy policy …

… you know that ethanol has to be one of the most misguided public policies in U.S. history.