For a thumbnail overview of the radical reduction in time it takes to travel long distances over the last 500 years, look at the time to cross the Atlantic Ocean from Europe to America, provided by Robert Bryce in his book Smaller Faster Lighter Denser Cheaper: How Innovation Keeps Proving the Catastrophists Wrong.

Update –  Another post on transatlantic crossings on October 1, 2018: Cost and time to cross the Atlantic has dropped by more than 90% in the last 500 years.

He points out at location 1582 of the Kindle edition:

Columbus’s first voyage across the Atlantic to the New World in 1492 took more than two months.  That famous trip launched a centuries-long effort to decrease the amount of time needed to get from Europe to America and vice versa. By the 1700s, sailing ships still needed six weeks or more to make the crossing. The never-ending push for Faster led to the steam engine. By 1845, the SS Great Britain, a steam-powered ship designed by the engineering genius Isambard Kingdom Brunel, was crossing the Atlantic in just fourteen days. A bit more than a century later, in 1952, the ocean liner SS United States, designed by William Francis Gibbs, was making the same voyage in just three and a half days, a record that stands to this day.  But the United States, like other luxury ocean liners, were destined to go the way of the buggy whip. In the late 1950s and early 1960s, jetliners began traversing the Atlantic in a matter of hours.

For the first transatlantic jet flight, the time was 10.5 hours to New York and 6 hours the other direction with favorable winds, for an average of 8 hours. Propeller planes were making the trip in 14 hours.

So here is a recap of the above-mentioned transit times:

Here is a graph of the 500 year history, leaving out the Mayflower and estimate for 1960s: 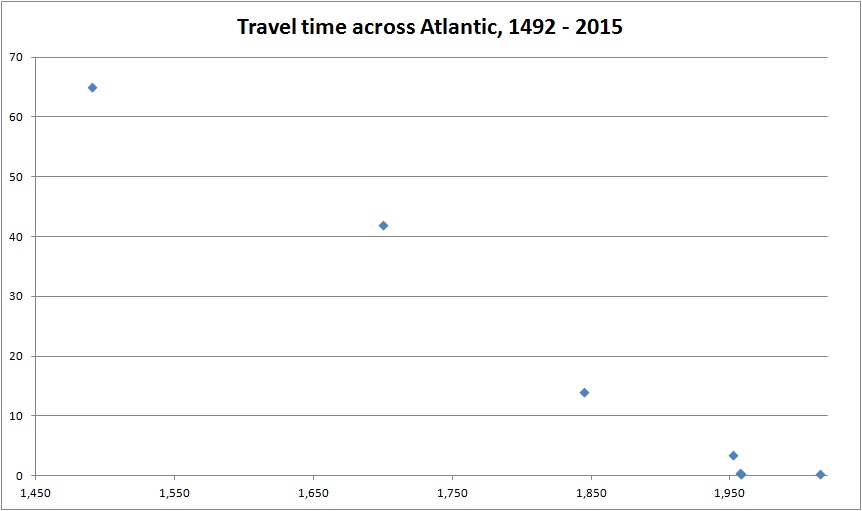 Here is a graph of the last 60 years: 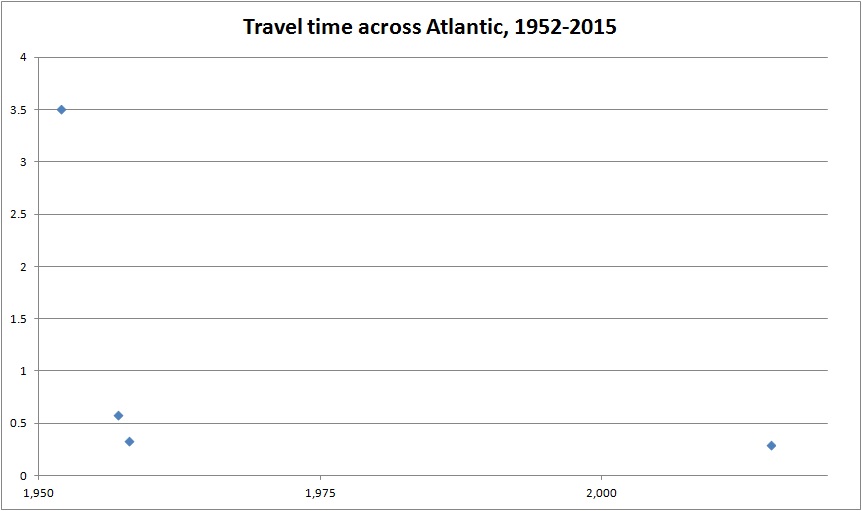 To see a continued trend in the increased speed of travel, we would need to add space shots. That is a topic for another day.

4 thoughts on “Time to cross the Atlantic – 500 year history”