One of the worlds I can only observe from a distance is making a feature documentary. I’ve been watching Jesse Moss as he produced and then marketed his documentary The Overnighters. That is a story of a Lutheran church in Williston that opened its doors to (predominantly) men working in the Bakken but arrived without a place to stay.

I’ll start to mention some of the coverage of the movie that is most helpful for me as I learn about that world.

10/10 – Tribeca – Jesse Moss Talks “The Overnighters’ and Morality in the Heartland – Interview with Mr. Moss goes into detail about how the documentary was recorded. Interesting tidbits are how he had to re-edit the footage to tell the story differently when the final dramatic event changed the whole story.

Since I haven’t mentioned anything about the movie before, that may not make sense.

I’m looking forward to seeing the movie because I know something about Williston, the church involved, and the overnighter program.

One fascinating part of this story is that Mr. Moss found sources, conducted interviews, recorded video, and generally developed this documentary by himself. Post-production work involved a very small team, but until that time, he was the entire crew.

For this month, he is in a different town every few days appearing at theaters where the documentary is being aired.

Check out the oil production per rig: 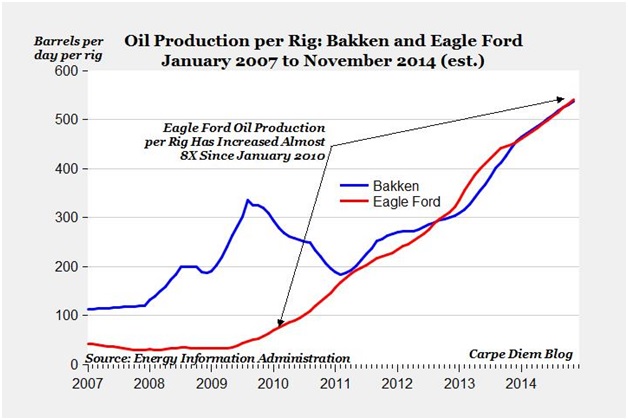 Production per rig isn’t a perfect measure, but the time it takes to drill and complete the well is a huge factor in the cost of a well. Regardless of how the stat could be refined, the increased productivity in the last four or five years is staggering.

10/23 – Bakken Shale – Bakken Study Analyzes Impact of Oil Prices on Development – Initial production in most wells across Williams, Mountrail, McKenzie, and Dunn counties are 1,000 bopd or higher. Wells at periphery aren’t as good. Study under discussion looks at feasibility of different output levels at different prices.

That tells me the drop in prices will curtail drilling at the margins of both the Bakken region and wells expected to be at marginal production. That would also suggest that drilling will refocus on the most lucrative areas of the Bakken.

My completely wild guess? Most of those production people will still have jobs and those working will have shorter drives to the drilling sites, which will be closer in to Williston.