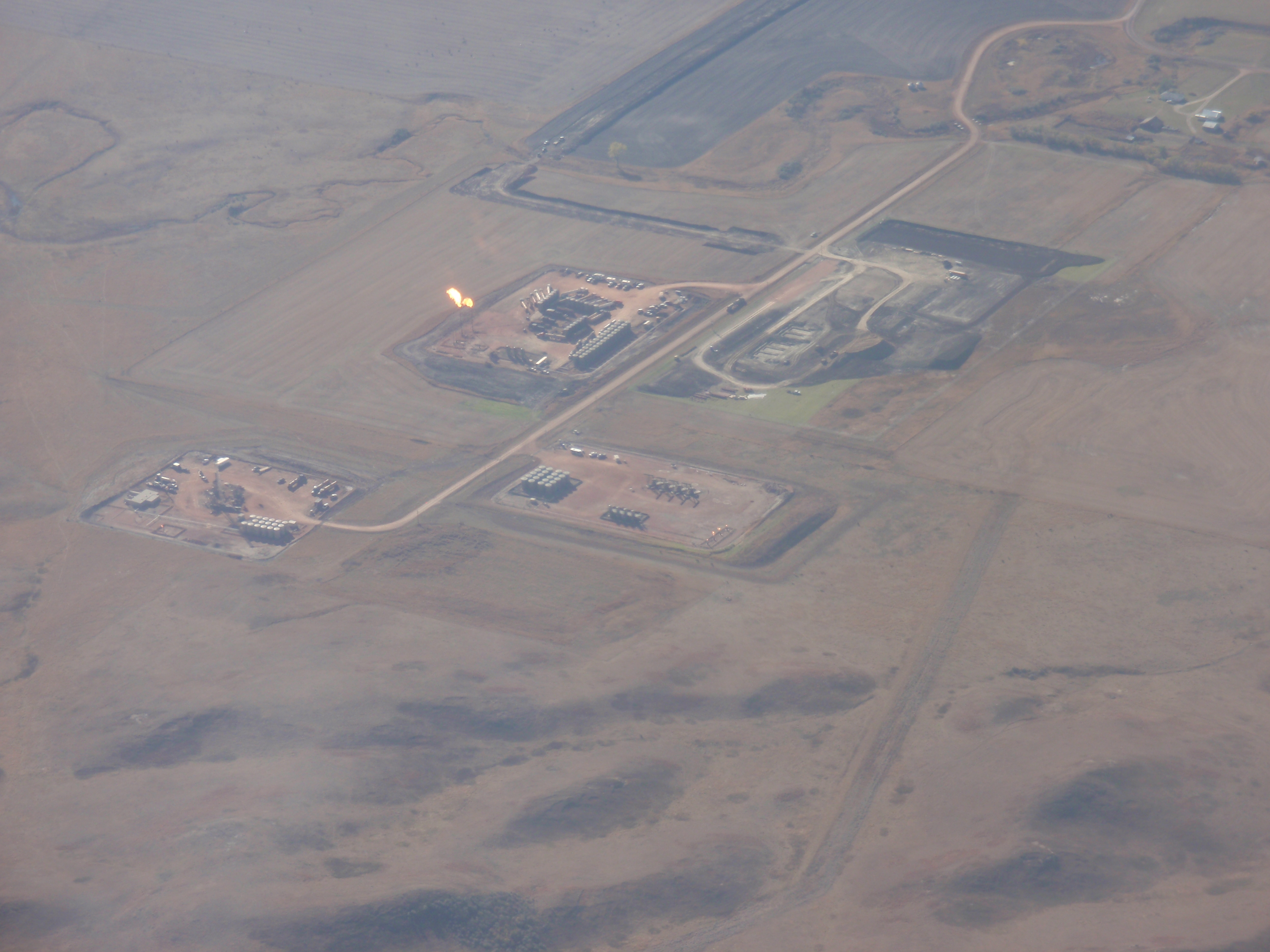 (All photos by James Ulvog. Above view of 4 pads, with a pair of flares visible in the middle and workover rig on pad in lower left.)

Following post was written on October 18, when my wife and I flew out of Williston:

We took a 6:25 a.m. flight, so it was still dark. The view on departure was fabulous.

I wish I had the camera equipment (and the skill) to show what I saw.

Words will have to suffice, along with photos taken during daylight.

Sky was clear until several minutes from the airport, then clouds slowly built up.

Drilling rigs are quite visible, what with those tall metal superstructures and the working deck all lit up. Sorta’ like an all white Christmas tree.

There are a lot of drilling rigs to the east of Williston. The funny thing is they are close to existing pumps. 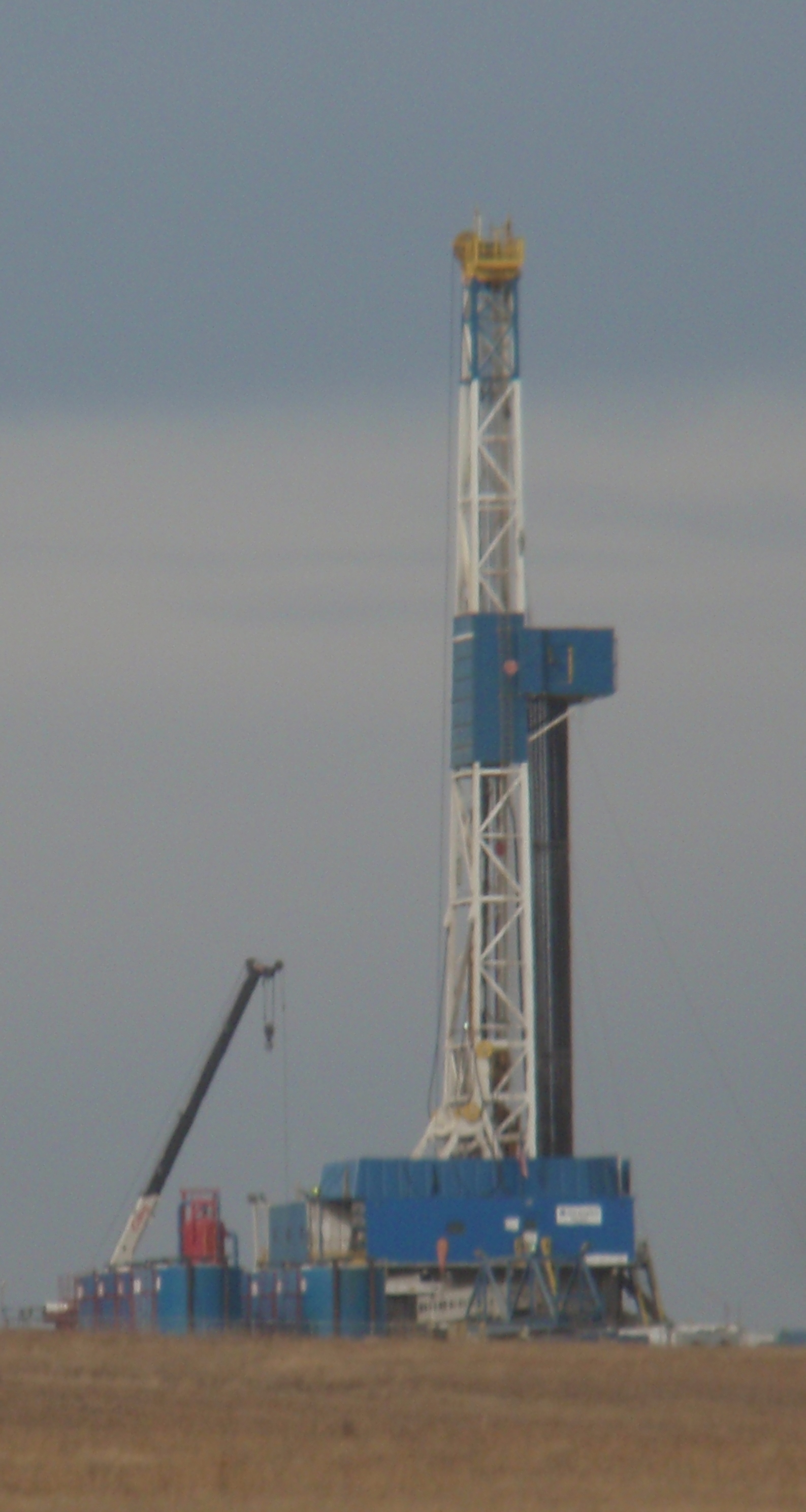 (Drilling rig located in the city of Williston, across street from multiple apartment buildings.)

The location of working pumps are exquisitely visible from the air, by the way.

Flaring is obvious. They give off an orangeish glow and most are bigger than the typical lights in a city, like street lights. More visible than the security spot lights on a farm.

There are a lot of flares east of town. I mean a lot.

One funny thing is they all seem to be in a straight line. That makes sense because wells are drilled on section lines. You can trace the section lines and count the miles. Seems like there were between 3 and 5 visible flares per mile. While climbing out from the airport it wasn’t possible to tell which sites had two or more wells on the pad.

Here is a view in daylight, when we landed: 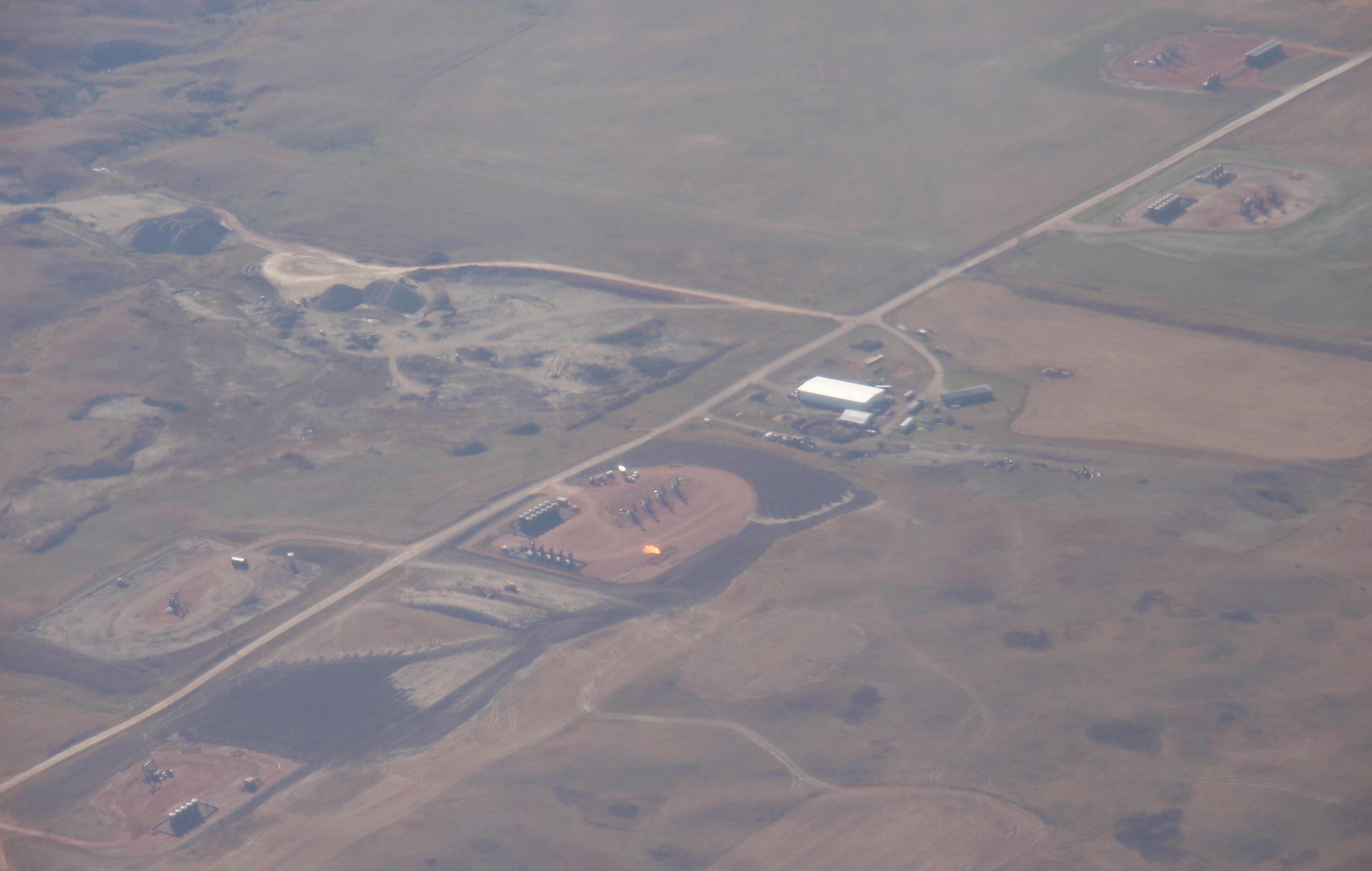 (14 wells by my count on 5 pads; if viewed at night only thing you would likely see is one flare and a smaller flood light at the farm)

Visible size of the flares varied. Some were small. Some of the wells obviously had a large pocket of gas draining, thus they had a large flare.

Something else that struck me is there are so many wells burning off gas so close to each other that it seems to me it would be economical to build pipelines to gather all that gas instead of burning it off. 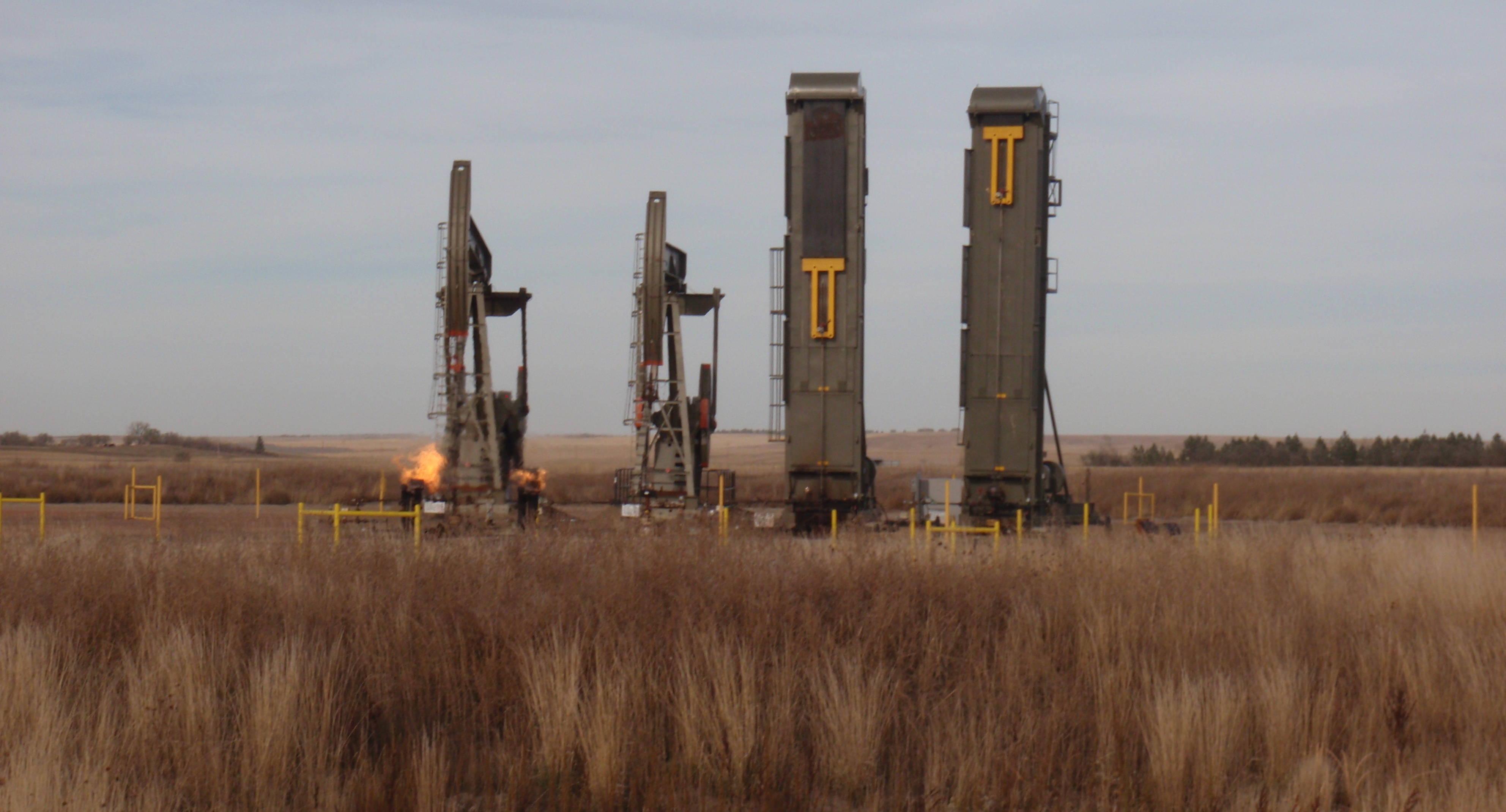 (4 wells on a pad, with 4 flares; north and east of Williston)

That makes me think it is regulatory holdups that are slowing down reduction of flaring.

I sure do hope that the plethora of federal , state, and county regulators can get their approvals moving.

Several miles from Williston we picked up some patchy, low clouds.

At first the tiny clouds just covered a flare or two. Then larger clouds covered half a mile.

A cloud over a flare produces an orange glow a few hundred feet across that is even more obvious than a single flare.

Growing cloud cover created a solid cover which was illuminated from below by a string of flickering glowing lights. Picture a string of Halloween lights in a fog.

As we gained altitude moving east, the cloud layer thickened. As we moved further from Williston, the light show faded, then stopped.

What each of those flares represents

As I watched the amazing show, I pondered that each of those little orange lights reveals the location of an $8,000,000 investment. Or maybe $16M for two wells each site, for $32M for 4 pumps. Or maybe $10 million each. 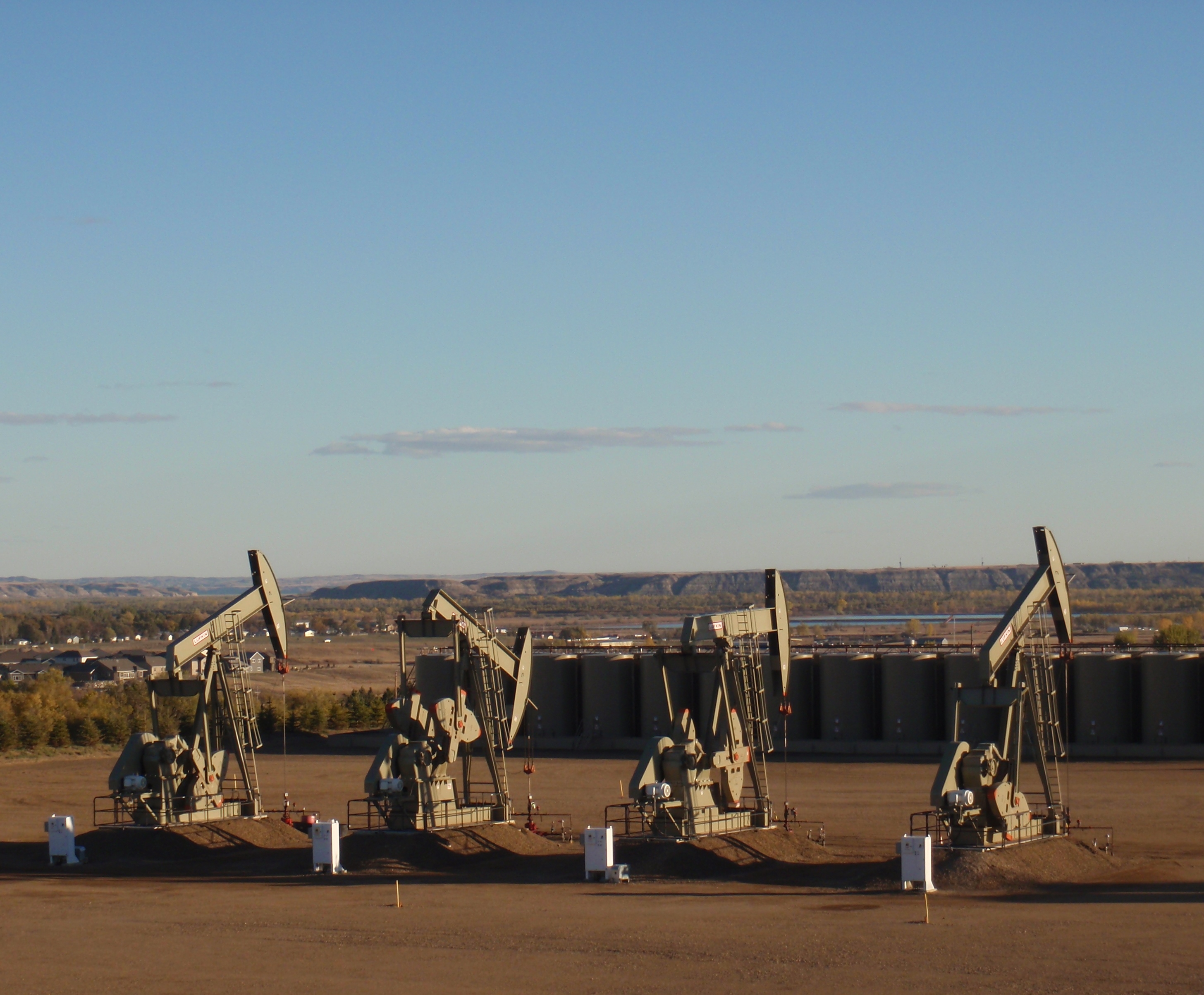 So that’s the night view of one part of a million barrel a day oil field.

When I go into observer mode I am amazed at so much of what I see.

Another example of amazing things – I wrote this post using my smartphone on the plane during the remainder of the flight to Minneapolis.

There is no better time to be alive than today. Gotta’ get ready to run to my connection.