One of several catastrophic obstacles to relying on wind power to generate a large portion of our electricity is that wind turbines only generate electricity when the wind is blowing. That makes wind power quite unreliable.

Diving further into that issue shows that the wind blows more in some months more than others and this variable capacity further varies by region.

Why is this an issue? Electricity must be generated at the instant it is needed (allowing for the time it takes for electricity to get from the generating source to your house). It cannot be stored.

Variability over the course of a year

Check out the following graph from the Energy Information Administration: 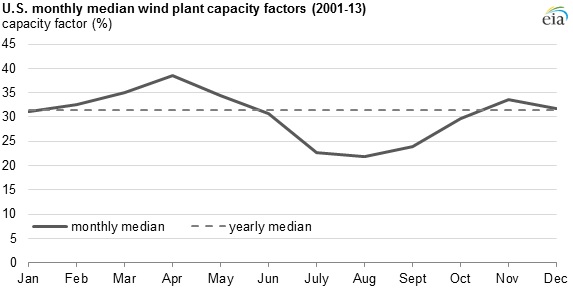 That graph, which can be found here, is in the public domain since it is government information. It shows that on average across the country during the course of a year wind facilities have an average capacity of about 32%.

Let’s assume a turbine with rated capacity of one megawatt, 1 mW. An average turbine of that capacity in an average location over the course of an average year would produce 0.32 Mw, or 320 kW.

If you plan on 1 mW of output from that turbine rated at 1 mW, you will need an average of 0.68 mW of backup capacity.

Go from the annual median to the monthly median, which is the solid line. On a national average for an average month, the fluctuation is from a high capacity of about 38% down to about 22% capacity.

Essentially that means you must have backup capacity equal to 42% of the capacity you plan to generate from wind (0.16mW / 0.38mW).

In other words, for every one unit of power you plan to get from wind you must have half a unit of backup power.

Dive into the following graph, also from the EIA: 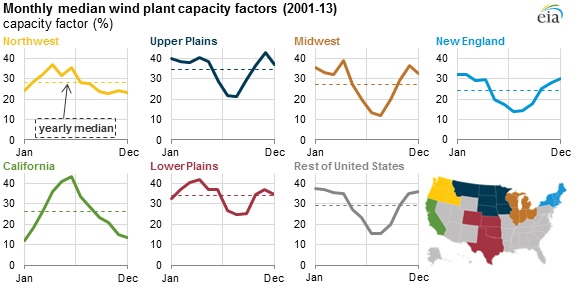 That graph shows even higher variability in some places like California and different capacity curves in each region.

Look at California! The average is about 26% capacity realization over the course of a year with a low of about 12% in December and January with a high of perhaps 43% in June.

Keep in mind all that backup power will only be used a fraction of the time which means a large portion of the construction cost (extra capacity) is wasted.

We have not even reached the deepest problems, which is the variability within a month and over the course of the day. All of the difference between demand and whatever the output from the wind turbine happens to be at a moment of a day has to be filled with backup power.

In addition to wasted construction cost it is highly inefficient to spool up and spool down a power plant. To count the amount of waste intentionally caused, keep in mind that some backup power has to be available the instant it is needed and therefore some portion of the backup capacity has to be kept running all the time to allow for the variable, unpredictable, instantaneous drop in wind. The electricity is needed the instant the wind drops; we can’t wait half a minute or three before the gas turbines spool up to full output. All that gas to keep the standby turbine spinning is wasted too.

For a lot of background that goes into far deeper explanation, check out an old post back on 8/8/15 from Million Dollar Way, which provided me a lot of learnin’:  Another Burr Under my Saddle – – Intermittent Energy, Nameplate Capacity, and the Capacity Factor.

Merely one tidbit from the MDW article on one aspect of the intermittents, specifically the difficulty and cost of storing electricity. Storing the amount of electricity that has the power equal to the oil stored in the Cushing Oklahoma crude storage facilities would require 40 years of output from 100 factories each of which is equal to the size of the new Tesla battery factory planned in Nevada. In other words, the energy storage capacity in Cushing is equal to the output over the next 4,000 years from the Tesla facility.