Here are a few articles of the last few weeks discussing oil production, possible direction of prices, and possibility of increased turmoil in Middle East.

8/11 – Wall Street Journal – Saudi Oil Output Sets Record Despite Global Glut – Both Saudi Arabia and OPEC hit record production levels in July. Saudi output hit 10.67M bopd, while OPEC hit 33.11M bopd. Eyeball the accompanying graph in the article and you can see output in 2015 and 2016 in total is at the highest level since 2002.

Iran’s output has hit 3.6M bopd, with their announced target of 4M bopd before they will consider discussion to freeze output. Article says speculation says they have likely hit a production ceiling.

Ironically, if Iran and each of the OPEC producers (other than Venezuela) are at maximum production, they might all get together and agree to a production freeze. Not that a freeze while everyone is running at maximum capacity would do any good.

8/11 – Wall Street Journal – IEA: Crude Production to Fall Behind Demand – The IEA is estimating that production in US will drop and world-wide consumption will increase in third quarter of 2016 resulting in just under a 1M bopd shortfall in supply. They are estimating an over 1M bopd surplus in fourth quarter.

8/12 – UPI – U.S. oil more resilient than thought – An EIA analysis estimates world-wide output of tight oil could double in the next 24 years, going from about 5.2M bopd to around 10.4M bopd.

Their guess on tight oil production in the U.S. combined with a few recent production points:

Check out the EIA’s graph. There is an astounding amount of oil coming out of Eagle Ford, Bakken, and Spraberry. All fields can ramp up again if oil prices rise. 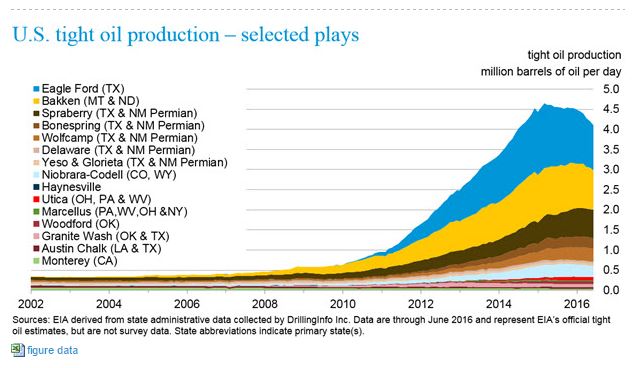 As a warning of tougher times for OPEC, consider:

8/13 – Real Money – If Oil Prices Don’t Rise, the Middle East Will Sink – This is yet another article pointing out the deliberate efforts to shut down US shale production haven’t worked. Slowed the increase? You bet. Taken out the industry? Nope.

Here is my summary of the author’s discussion:

Concept suggested by the author is that if oil prices don’t rise substantially, most countries in the Middle East, Saudi Arabia especially, will experience severe social disruption, possibly internal civil war, possible war between states, and possibly severe war between Sunni and Shia (read that as Iran/Saudi). Making that depressing scenario more likely is the low cost of development that has evolved in tight oil makes US producers the swing producers. The possibility that tight oil production could be ramped up quickly and economically might keep a ceiling on oil, which might keep oil from rising to the level needed to sustain viability of several countries.

There are a huge number of assumptions and assertions in that one paragraph summary, several of which the author of the article doesn’t buy. If you think that scenario sorta’ kinda’ describes the economics of tight oil, there is a good chance the social turmoil will get really, really bad in the Middle East.

So here is the $64,000 question: When demand rises, can US tight oil drillers increase production enough to balance supply/demand at a price below the level Saudi Arabia needs to fully fund their social spending programs?