Companies and industries that can’t keep up with changes in technology or demographics or the internet are getting hit hard.

A few more hits to the old way of doing things:

The wide use of Uber and Lyft has affected the taxi industry. As one measure of the technological disruption, consider the price of a taxi medallion in New York. One cannot operate a taxi there without a medallion.

The market for medallions has collapsed. Consider the following graph by Mark Perry, described in a tweet on 7/6/17. 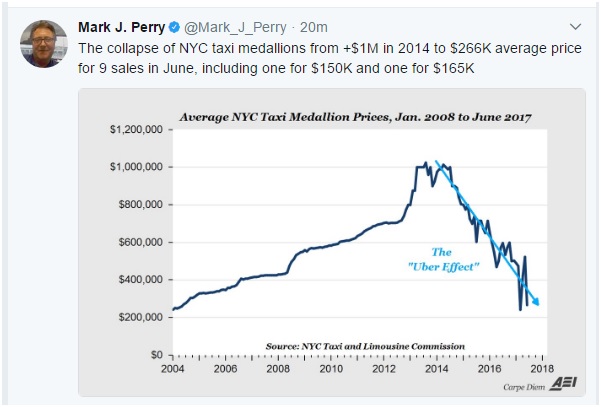 In other collapsing industries…

7/6/17 – Wall Street Journal – In TV Ratings Game, Networks Try to Disguise Bad News from Nielsen – The Nielsen rating system can be gamed by misspelling the name of a program.

The major networks pull that trick to increase their ratings. If there will be a particularly bad night or week, you can just misspell the show name and the poor ratings for that show won’t enter into the ranking for the real show.

That is called ‘tilting’.

Other tricks include not labeling a rerun as such. Or loading network commercials at the front end of a show, since Nielsen only counts viewers through the last network break. One final clever stunt is to include viewers of a rerun as viewers of the original broadcast.

8/24/17 – Wall Street Journal – Sears to Close Another 28 Kmart Stores as Sales Slump Continues – Tally of closed stores currently stands at 100 gone so far in 2017, another 150 stores by the end of September, and an additional 28 now scheduled for closing.

The chain reported a 11.5% drop in sales at stores open over a year. Same-store sales decline 12.3% (presumably in the last year) which is a deterioration from a 7% drop one year ago.

The company has sold its Craftsman line of tools to Stanley Black & Decker (generating $900M), realized $469M from selling off real estate, and will now offer its Kenmore major appliances at Amazon.

The company gave a going concern warning in March 2018.

As a brief accounting observation, when a company is selling off assets (including some of the crown jewels) just to stay alive, then yeah, there is a going concern issue.

9/18/17 – Wall Street Journal – Toys ‘R’ Us, Once a Category Killer, Is Forced Into Bankruptcy – The company filed for reorganization on Monday.  Vendors and suppliers were tightening terms in advance of the holiday season, which obviously means the store would have had a difficult, if not impossible job, filling up the shelves for the holiday rush.

Company says most of its stores will be open for the soon-arriving holiday season.