5/9/21 – Amy Thompson at Space.com – SpaceX launches 60 Starlink satellites in record 10th liftoff (and landing) of reused rocket –  On 5/9/21, SpaceX put another load of 60 satellites into orbit, increasing the constellation of Internet-providing satellites.

Of note is that this is the 10th launch and recovery of this particular Falcon 9 rocket. That is the highest number of reuses yet of any in their fleet.

The goal, announced three years ago, is to fly each booster 10 times before major refurbishment and ultimately get up to 100 flights out of every booster.

END_OF_DOCUMENT_TOKEN_TO_BE_REPLACED

Amazon is developing its own low Earth orbit satellite system to provide Internet connectivity across the planet. They are calling this Project Kuiper.

4/19/21 – Ars Technica – Amazon’s first Internet satellites will not launch on Blue Origin rockets – Some background to start the discussion.

In addition to Amazon, Jeff Bezos also owns a rocket company developing spaceships. It is called Blue Origin. They are developing New Glenn rocket as a lift vehicle. Article says first flight for New Glenn is not expected until fourth quarter of 2022 with likely slippage to 2023.

Big announcement covered in this article is Amazon announcing they will use the Atlas V rocket from United Launch Alliance for the first nine launches of their satellites.

END_OF_DOCUMENT_TOKEN_TO_BE_REPLACED

The Dragon capsule Resilience was successfully recovered during a night landing off the coast near Panama City, Florida.

This is the first night landing in the American program since Apollo 8.

Video of the recovery can be seen below. Skip forward to the about the 6 hour 34 minute point in the video. Splashdown is about 6:48. Dragon is onboard at about 7:15 mark.

END_OF_DOCUMENT_TOKEN_TO_BE_REPLACED

China is building their own space station. On 4/28/21 they successfully launched the first of three main components.

4/28/21 – Space.com – China launches core module of new space station to orbit – The central component of the space station is called Tianhe, for Harmony of the Heavens. This module is 54 feet long. Two more sections, each of them 47 feet long, will be launched. The basic station will be assembled by the end of 2022.

A Long March 5B heavy-lift rocket launched the space station.

A cargo launch will go to the station next month with three astronauts arriving in June.

This is not the first space station China has put in orbit. The first one, Tiangong-1, back in 2011 had visits from two crews of three astronauts each before it reentered the atmosphere and was burned up.

END_OF_DOCUMENT_TOKEN_TO_BE_REPLACED

4/23/21 – Science Alert – In a Huge First, SpaceX Just Launched Astronauts to the ISS on a Recycled Rocket – In their third flight to the International Space Station, SpaceX used a Falcon 9 rocket and Dragon capsule that had both previously been used. This is a big deal in terms of reducing the cost of space travel.

Along with the two previous flights this ends the American reliance on Russian lift vehicles to get crew to the space station.

SpaceX successfully recovered the booster. Again. They sent out a tweet saying this is the 80th recovery of a rocket. Very cool.

With these four astronauts (one from France and one from Japan) on board, there will be 11 people on ISS, which is a record. Another crew will return on the Dragon in a few days.

END_OF_DOCUMENT_TOKEN_TO_BE_REPLACED

What are the prospects for drilling and oil production in the Bakken oil field in North Dakota? Particularly in regards to Williams County, what does the near future hold?

With all the turmoil in the oil industry lately, haven’t had much discussion here on what the future holds.

The Million Dollar Way blog had a great commentary by Bruce Oksol on 4/8/21: Idle Rambling In Response To A Reader’s Question.

The reader asked if there is likely to be any future development around Williams County, or on the other hand, if there is any acreage left to develop.

END_OF_DOCUMENT_TOKEN_TO_BE_REPLACED

The U.S. Air Force is working to develop drone fighters. Most recent test flight had the drone launch another drone.

All the original manufacturers for every component of the Minuteman ICBM system are either gone or the assembly lines have long since been shut down. That means USAF is using its own production facility to create the myriad of necessary spare parts.

4/6/21 – New Atlas – Valkyrie combat drone launches another drone during test flight – Imagine a drone fighter that accompanies a cutting-edge manned fighter such as an F-35. The escorting drone could carry a heavy load of bombs to multiply the strike power of a fighter. It could carry an assortment of air-to-air missiles to defend against other planes or air-to-ground missiles to strike radar or other defense assets.

END_OF_DOCUMENT_TOKEN_TO_BE_REPLACED

SpaceX and OneWeb are both making progress on developing a constellation of satellites which will provide Internet connectivity across the planet. Discussion of OneWeb’s progress follows description of SpaceX’s launch.

Oh, by the way, after reading this post I am confident you will agree that the future is so bright we ought to wear sunglasses all the time.

END_OF_DOCUMENT_TOKEN_TO_BE_REPLACED

I am continually amazed at the creativity of cheaters. A few examples in the news recently:

I mentioned these for the laughter value and more importantly for the educational value.

The stories are amusing. If you work in the finance area or are leading an organization, having an awareness of these schemes might help you recognize one if presented to you.

Your entertainment and anti-fraud training for the day:

END_OF_DOCUMENT_TOKEN_TO_BE_REPLACED

As shown in the following graph, crude oil production increased again in August 2020. It is up 122,351 barrels of oil per day (bopd) over revised July amount, which follows a 148,343 bopd increase over June.

END_OF_DOCUMENT_TOKEN_TO_BE_REPLACED 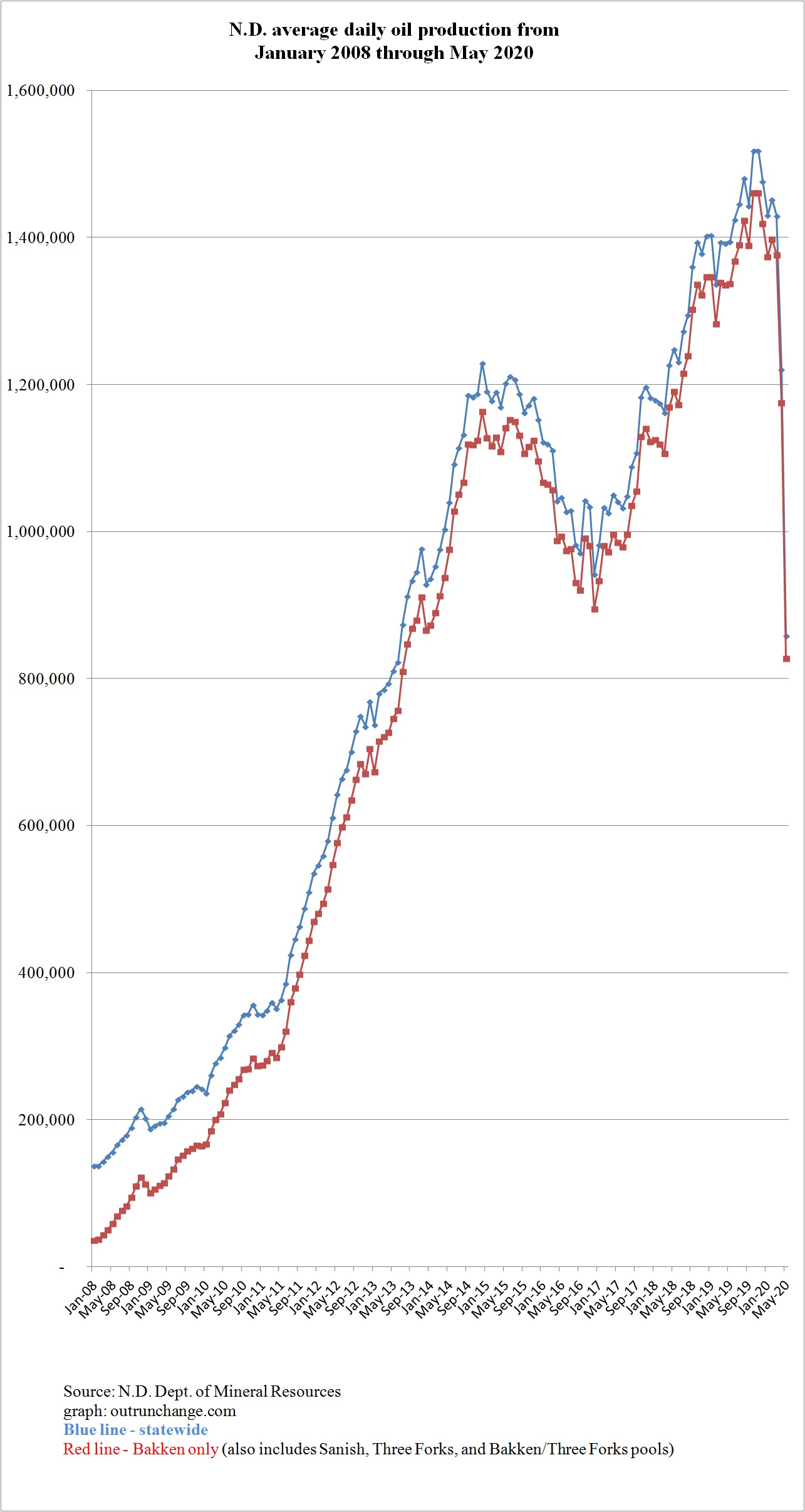 With a 45 day lag in reporting to allow data submission and collation, the production data for crude oil during May is now available for North Dakota.

The combined shocks of reduced demand for the pandemic and flooding the market by Saudi Arabia collapsed prices which then collapsed production.  A glut of oil jammed the storage capacity for a while which further drove down the prices available to producers in North Dakota.

The impact on volume and value of production is staggering.

The graphs of production in this post demonstrate how rapidly a massive industry, like oil production across an entire state, can respond to price signals in a capitalist economy. That part is amazing to see.

END_OF_DOCUMENT_TOKEN_TO_BE_REPLACED

A useful adjective to describe the devastation we are seeing in the job market escapes me.

New unemployment claims for week ending 5/16/20 were 2.12 million, seasonally adjusted. Nearly as many, 1.19 million who are not otherwise eligible unemployment filed for Pandemic Unemployment Assistance (PUA) in the week.

That’s somewhere around 3.3 million people who lost their job in week 10 of the shutdown.

My tally of data:

That means about three out of ten people who were in the civilian labor force in February are now out of a job (28.9%).

If you haven’t passed out from the shock of those numbers, END_OF_DOCUMENT_TOKEN_TO_BE_REPLACED

As of this morning, places of worship in California will be allowed to resume full operations in Phase 4, which will be at some distant point in the future, likely the end of the year or sometime in 2021. Vague comments by state authorities hint the opening date may be after a vaccine is in use.

In Illinois, full worship services will not be allowed until after a vaccine is in use, with the governor acknowledging that will be 12 or 18 months from now.

Another state, I lost track of which one, put worship in the last category to reopen, along with concerts and stadium-filled athletic events.

Other states and counties, too numerous to bother gather articles for specific citation, have placed worship services low on the list of places to open.

It now looks like the First Amendment may be put back in the Constitution after having been removed by a wide variety of governors.

Several recent events for you to consider:

If you think I’m being too harsh on the long list of governors and bumbling public health officials who won’t allow in-person worship, be advised that too many of my relatives and ancestors fought for our freedom to let American freedoms be trampled upon.

Three of my relatives I personally knew came home from war with life-long physical or emotional injuries. Each suffered until he died.

One of my ancestors died in the effort to crush slavery and rebellion. His blood is in the ground at Champion Hills, east of Vicksburg.

The price paid for our freedom is measured in blood.

5/20/20 – Tyler Bursch, attorney representing four named advocacy groups and over 1,200 pastors in the state of California – A Letter to Gov. Gavin Newsom from Churches / Declaration of Essentiality / Reopening May 31, 2020 – Letter indicates it is been signed by more than 1,200 pastors.

END_OF_DOCUMENT_TOKEN_TO_BE_REPLACED

I don’t have any word that can describe this disaster:

New unemployment claims for week ending 5/16/20 are just under 2.5 million, seasonally adjusted. An additional 2.2 million people who wouldn’t usually be qualified for unemployment filed during the week for Panemic Unemployment Assistance. The new PUA tally is shocking.

The tally of seasonally adjusted new claims is 38.6 million since the economy was put in an induced coma.

Here is my running tally of the new unemployment claims.