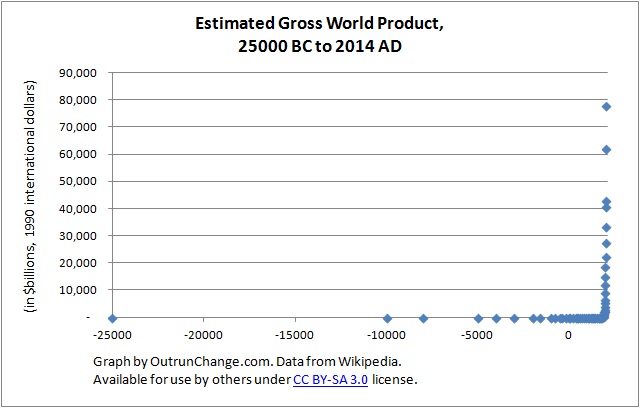 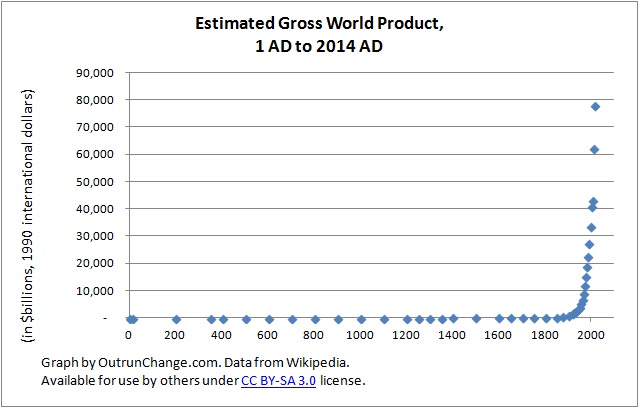 In fact, there are several times when large increases took place.

Earliest 24,000 years – First, let’s go back to the earliest time and lop off the later years. 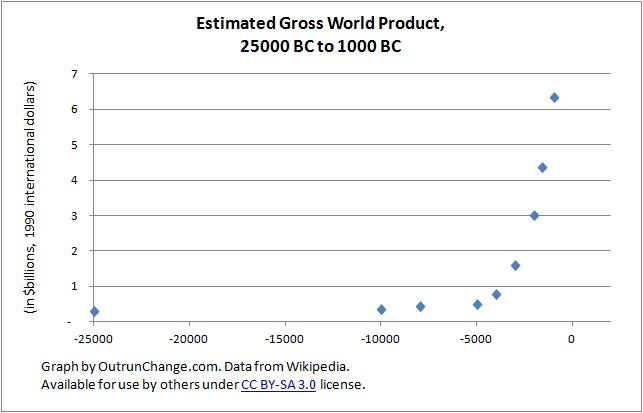 That shows a break out from the worst GWP, starting in 4000s BC. There was some visible growth in the 2000s and 1000s. Actually that is eight times as large in 1000BC as in 4000BC. On the other hand, that is probably coming off an ‘enjoy your dirt-with-a-bit-of-grain pancakes until you die in your late 20s‘ base. 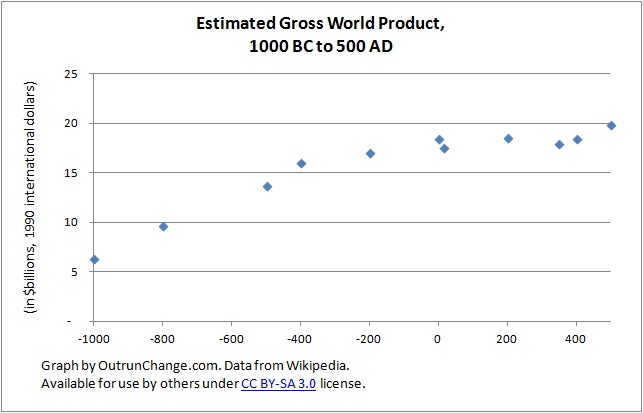 GWP took off after 1400, increasing  to 2.9 times higher by 1750. This would bring us to the start of the Industrial Revolution, which began in Western Europe and slowly spread out from there. 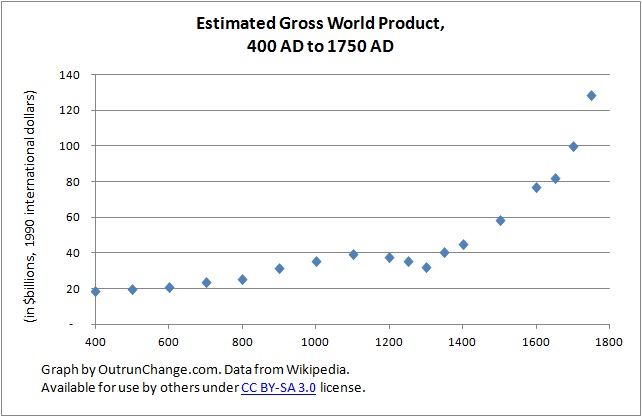 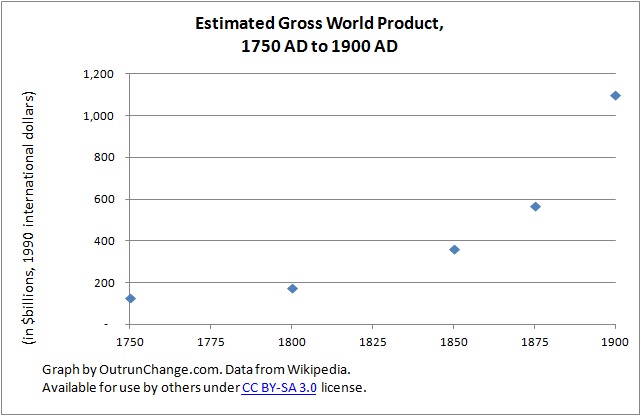 Ponder the radical expansion in technology and wealth from cars and airplanes after the turn of the century. The Great Depression is visible and dramatic growth after WWII is visible (keep in mind all the brightest minds in the economics profession predicted a return to the depths of the Depression after the end of the war). 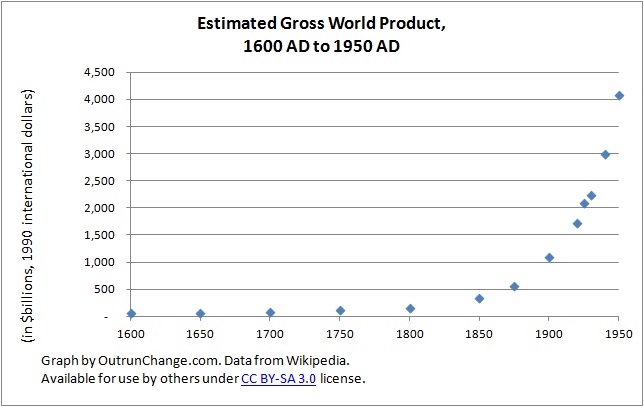 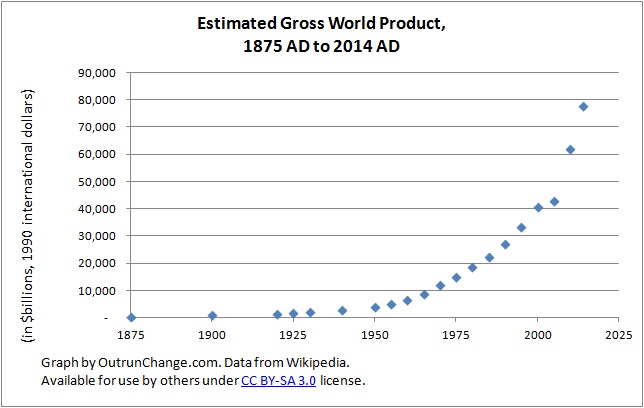 1600 – 2014 – For a little longer time horizon, here is the graph for the last 400 years. Those times of dramatic growth before 1950 shrink into what seems to be a horizontal line. 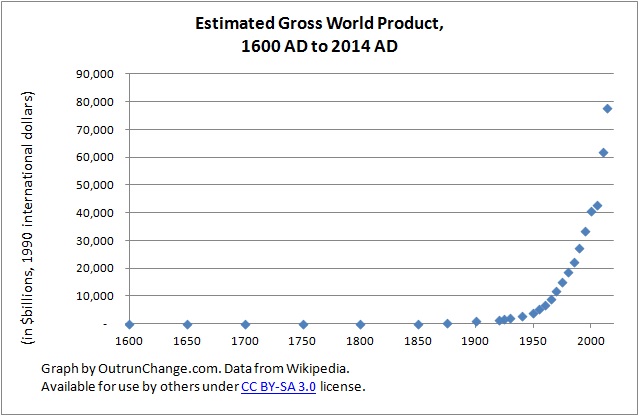 The rate of change in the above graphs is too much to see on a longer time horizon, so I redrew the graphs on a log scale. Check it out.

Logarithmic scale 1 AD to 2014 AD – Now the data for the last 2000 years can actually be seen across the whole time span. There is dramatic growth across the 2000 years, but still a major change since 1950. 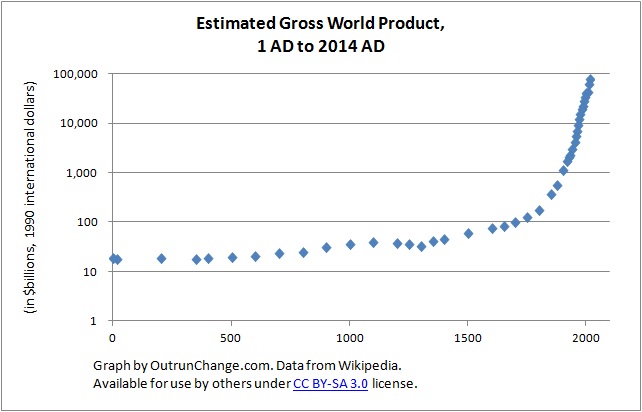 So, one final graph. 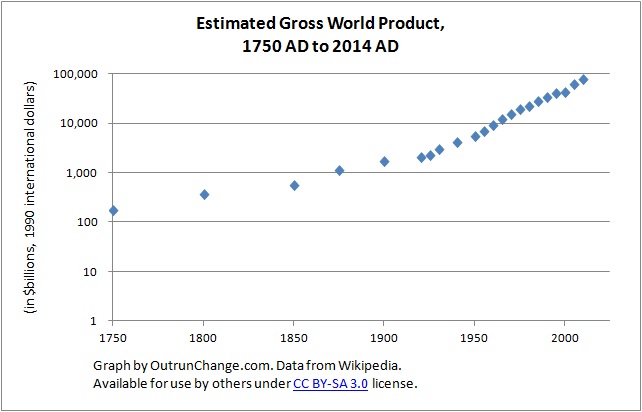 Hope you enjoyed the tour of gross world product over the last 27,000 years.

Raw data – So that you could do your own graphs (or double-check mine), here is the raw data:

Source:  Article titled “Gross world product” by Wikipedia licensed under CC BY-SA 3.0.  All data and tables above which are derived from this information are in turn licensed for use under the same CC BY-SA 3.0 license.