One of the entertainingly deceptive arguments defending the number of birds killed by wind turbines and solar farms is that cats kill far more birds every year.

Various reports suggest upwards of a billion birds nationwide are taken out by cats each year. The intentionally misleading argument is essentially that the tens of thousands or hundreds of thousands of birds taken out by renewable energy don’t count because outside cats are responsible for so much more damage in the avian world.

So that you don’t think I’m making this up, check out the AP’s Big Story report: Emerging Solar Plants Scorch Birds in Mid-Air.

This major AP report discusses the thousands of birds killed at the Ivanpah facility south of the Nevada-California border on the way to Las Vegas.

Over 300,000 heliostats focus sunlight on three towers 400 feet in the air. The temperature around the towers reportedly hits 700 degrees.

Nobody knows how many birds are killed by the towers and die on site. Current methodology for tallying those fatalities is seriously undercounting the number.

Nobody has the foggiest clue how many birds are mortally wounded and land outside the perimeter of the site since there is zero effort to count them.

Nobody understands the causality of why so many birds are dying.

Scroll down to the last six paragraphs of the article. Some key comments:

Biologists don’t know of any way to reduce the number of birds that get their wings toasted.

The project owner is offering to pay $1.8 million to compensate for the expected bird deaths. The net impact of that settlement would be issuing a kill-all-you-want permit that gets them off the hook for all future birds that die at the site.

The company is also offering to fund projects to spay and neuter domesticated cats. 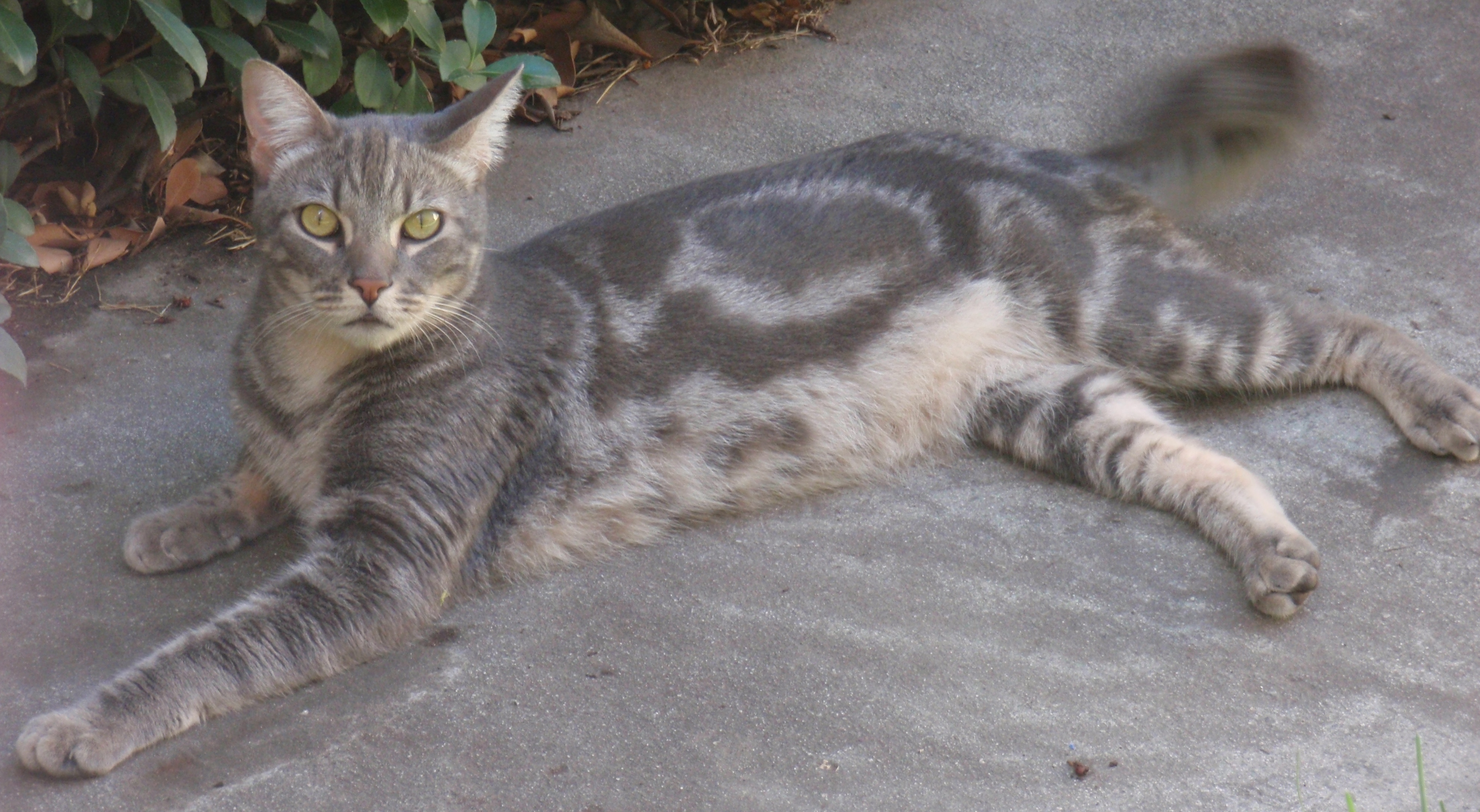 (Photo by James Ulvog of a threat to pelicans and migratory ducks that is every bit as serious as a couple of heliostats in the desert. Also as much of a threat to the golden eagle and California condor populations as any wind turbine. Check out the vicious eyes, fangs, and claws of a deadly bird killer.)

Again, they are willing to pay for efforts to prevent new litters of cats.

Why? Because cats kill soooo many birds. Cutting down the number of outdoor cats will reduce the number of dead sparrows and starlings in the city, which will offset the migratory birds, protected birds, and even brown pelicans killed by the solar towers in the desert.

Why do I mention pelicans? In the first half of 2013, the Ivanpah compliance reports indicated several brown pelicans, a Yuma clapper rail (federally protected) and multiple migratory ducks (illegal to take without a permit) were found dead at the site.

In his August 26 article in ReWire, In Solar Discussions, There Are Birds and Then There Are Birds he provides a superb analogy. I’ll quote him since he has given permission for journalists to do so. He says:

Say you’re a person passionately concerned about African wildlife, and in particular the plight of the white rhino, and you’re talking to a friend about the threat to that magnificent animal from illegal poaching. “It’s a shame,” replies your friend, “but you know, domestic cats kill far more mammals.”

You’d likely look at your friend as if he’d lost his mind. Who would lump a house mouse into the same category as a rhino just because they both fit into the taxonomic order of “mammals”?

Starlings or pigeons or seagulls do not have the same significance as California condors. If you disagree with that conclusion, I am guessing you would be in favor of repealing the endangered species laws since I’m sure you would argue that because we have lots of rats and feral cats around, then the last thousand of some other species don’t count for anything. Right?

A friend of mine who retired from the Coast Guard declared that seagulls are cockroaches of the sea.

I think he would like to get rid of a lot of them. No argument from me. That doesn’t mean it is okay to kill a bunch of migratory birds because we could take action to protect seagulls from predators.

A church client of mine has a messy health problem due to pigeons perching on lines outside the entrance to the sanctuary. My guess is that it wouldn’t be legal to shoot those mess-making critters. Even if we found lots of dead pigeons on the ground some day with pellet holes in them, that wouldn’t be near the same order of magnitude of significance as finding two halves of an eagle under a wind turbine.

Does that mean I’m opposed to killing all migratory birds? Absolutely not.

In contrast, the slice-and-dicers and wing-toasters can take out as many migratory and protected birds as fly nearby with no bag limit, no permits, no fees, and no regard to the season. It goes without saying there will be no criminal prosecution.  Wind turbines can even take out golden eagles and bald eagles. Some wind turbines have been knowingly sited within territory inhabited by California Condors.

What’s the problem? Those two cats that regularly wander through my back yard, a cute orange tabby and a handsome gray tomcat, probably take out lots more birds every year than a little ol’ 2.2MW turbine. It is quite silly to say those two cats cause more environmental damage than one slice-and-dicer.