A few articles of interest on the wide open frontiers that surround us now – U.S. production of petroleum to surpass Saudi Arabia; sheepdogs protect predators as well as sheep.

Check out the huge increase in US production, compared to Saudi Arabia: 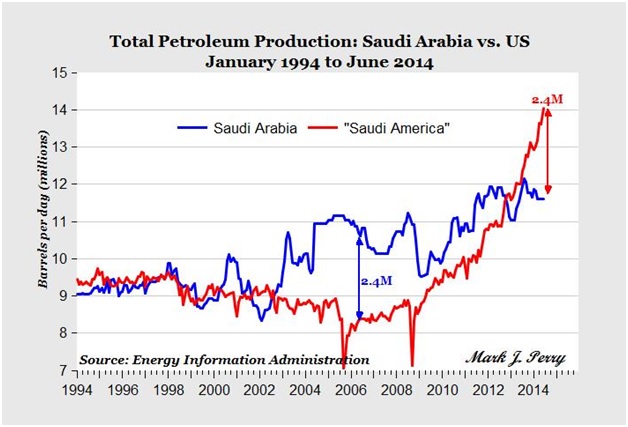 For June and August, production of crude oil and associated liquids was almost as much as production from Saudi Arabia. With soaring US production, the expectation is the US will surpass Saudi Arabia in the next month or two. Article points out oil prices have been stable in the last few years, in spite of turmoil in Syria, Iraq, Libya, Ukraine.

10/3 – Carpe Diem – Another energy milestone: “Saudi America’ was the world’s largest petroleum producer in June for the 20th straight month. Other than the definition just mentioned, the headline tells the story.

I included the graph at the top of this post.

What caused that change?

As Alex Epstein would point out, all that shale was worthless 10 years ago. It has been in place, by the way, since before the first oil well was drilling in Pennsylvania.

Don’t know where to file this, so put it in my good stuff update…

9/30 – ReWild from KCET – Good Dog! Sheepdogs Protect Predators as They Protect Sheep – I am fascinated by unintended consequences. One of the running tensions in the western states is predators such as coyotes, wolves, or mountain lions that kill livestock.

The article, by Chris Clarke, explains their unintended consequences from the extensive efforts to kill predators. Two caught my eye. First, when the predators are killed that not only reduces the number of livestock killed it also makes life easier for rats, rabbits, and deer. If the population of those critters gets out-of-control it causes overgrazing of the natural habitat, which is a problem of its own. Second, in a pack of coyotes, only the alpha male and female will breed, which holds down the coyote population. If an alpha male or alpha female is killed in the widespread effort to hold down the number of predators, the pack will break up and lots more male and females will be breeding.

Those guys loooove to chase off predators as they guard the sheep. Look at all the things guard duty accomplishes. First it doesn’t kill off coyotes and mountain lions and wolves indiscriminately. Second, when those predator critters can’t get an easy meal from the sheep herd, they go have a rabbit or rodent or deer for dinner. That holds down the population of other animals, which if they get out-of-control, will require another round of official hunting or poisons or bounties to keep them under control.

How ‘bout that? Having those sheepdogs do what they love to do protects the sheep. And protects the predators. And helps control the population of varmints.

Now that is a good unintended consequence.