Entertaining contrast of two articles I saw on Friday. Each points to a different future. Which world view will make life better for more people all over the planet? Which energy source will provide prosperity for the most people? 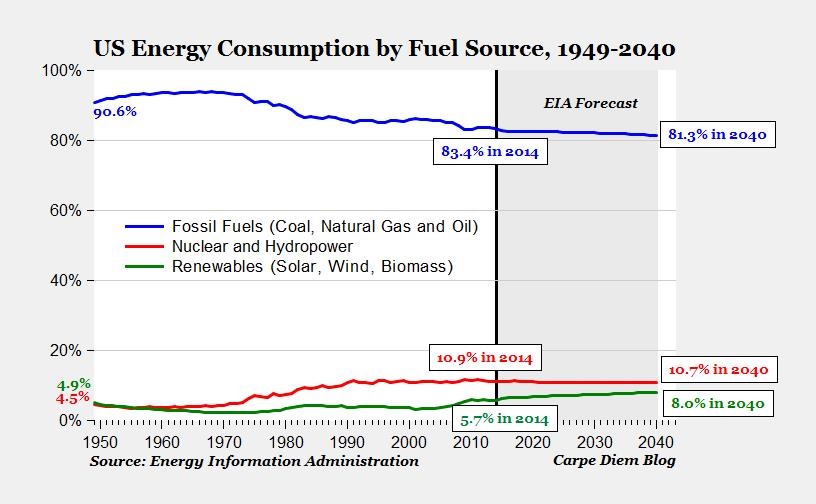 (From Carpe Diem. Used with permission.)

3/13 – Matt Ridley at Wall Street Journal – Fossil Fuels Will Save the World (Really) / There are problems with oil, gas and coal, but their benefits for people—and the planet—are beyond dispute

Article was feature on front page of the Review section on Saturday.

I will talk about this article a lot. In the meantime, here’s my paraphrase of just a few major points:

subsidizing wealthy crony capitalists to build low-density, low-output, capital-intensive, land-hungry renewable energy schemes, while telling the poor to give up the dream of getting richer through fossil fuels.

3/9 – Ensia – Will Natural Gas Dim Solar’s Shine? / As natural gas booms, renewable energy proponents ponder whether it will serve as a bridge or roadblock to photovoltaic power

Let me rephrase that for you. The production of solar power is only feasible because taxpayers cover 30% of the production costs and state legislatures have dictated to utilities that they must buy wind and solar power regardless of the cost, disruption, or instability created.

As I understand the economics, household PV is only feasible because of two factors:  first, heavy taxpayer subsidy; second, all electricity is sold back to the utilities at retail price.

About those technology advances – I wonder what happens to the economic viability of the installed utility-scale facilities when the technology makes rapid progress in the next few years? Who picks up the tab if Ivanpah is economically obsolete in three or ten years?

Paragraph 12 and 13 suggests we credit the fracking revolution to the federal government. That might be a bit of a surprise to all of the private sector players mentioned in The Frackers and The Boom who sweated blood and money for years and years and years to finally discover the long string of secrets needed to make horizontal drilling and hydraulic fracturing actually release gas and oil that have been untouchable since Rockefeller got rich.

Last part of the article mentions that both natural gas and solar have challenges. After listing all the standard environmental risks and challenges of natural gas, the only challenge admitted in the article that is facing solar is the renewal of the investment tax credit. Solar has no environmental or technical or policy challenges other than the ITC. Well, the issue of intermittency is actually mentioned in the article but not in context of a challenge to solar as an energy source with unlimited growth potential.

Article points out that EIA predicts renewables will generate 16% of electricity in 2040.

Before you jump for joy, consider that in 2014, renewables excluding hydro generated 281 GWh of 4,092 GWh total electricity, or 6.9%. Assuming that 16% doesn’t include hydro, that means in the next 25 years, renewables will increase market share only 130%.

Oh, we would also have to keep the displaced nuclear or coal plants in operation and on-line for the moments that the wind isn’t blowing. Or the sun isn’t shining at night. Or it is raining during the day.

Oops. Reading the article alone led me to a bad assumption. I was giving renewables too much credit in my calculation.

See the chart at the beginning of this post. Renewables excluding nuclear and hydro provide 5.7% of energy consumption (that is different from electricity production) in 2014 which is projected by EIA to increase to 8.0% in 2040. That is a mere 40% increase in market share over the course of a quarter century.

Feel free to backstop my math. Even if I am wrong, please explain why renewables are projected to be anything other than a minor player in sustaining prosperity.

If you are really into the topic and have read all the way to the end of this meandering post, please see the first comment on the Ensia article. Then look at the last phrase of the quote from the WSJ article mentioned above. Adopting the commenter’s proposals would guarantee that poor people around the world would stay poor and middle class people would become poor.

Those policy ideas would also result in large numbers of poor people dying of wood smoke (check out the WSJ article for what that statement means). I don’t know what the commenter or the author of the article think about that issue, but in terms of ethics and morality, I have a serious problem with that outcome.

Check out both articles. Like I said, what a great contrast.