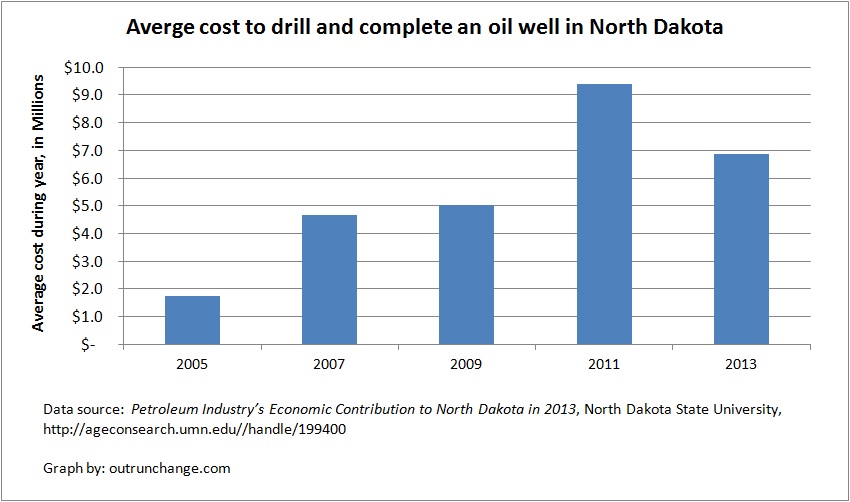 Petroleum Industry’s Economic Contribution to North Dakota in 2013 is the current update to a bi-annual analysis of how much the oil and gas industry contributes to the state’s economy. You can find the report at the previous link or here. The research was conducted by Dean A. Bangsund and Nancy M. Hodur, profs at North Dakota State University.

The executive summary provides a great overview of the petroleum industry and the economic activity in the state. Worth reading for the overall background, a general intro to the energy industry, and what’s going on in Bakken.

I read most of the report. In addition to historical information on average cost to drill and complete a well which is summarized in the graph above, here are some of the highlights that caught my eye:

Definitions that clarify for me the different sectors of the industry (all direct quotes):

Extraction … the process of developing and recovering mineral resources. Bringing oil and gas to the surface

Infrastructure – Construction of plants, pipelines, and other facilities

The most fascinating thing for me in the entire report is that extraction (ongoing servicing of the wells) is now as large as exploration (drilling and fracking the wells).

The astounding part is that in terms of direct impact, extraction is now slightly larger than exploration. If I’m reading the data correctly (footnote in table 14 is just one specific data point) completion is included in exploration. That means the ongoing process of pumping oil has an equal amount of direct impact in the state as drilling & fracking. My guess is if we were to look at the total dollars, not just what stays in the state, exploration would be higher but the study is looking at impact inside the state.

Servicing and maintaining the average of 8,950 producing wells (my calc) during 2013 provided the same direct impact as drilling 2,183 wells (number from the report).

If I understand the picture correctly, that has significant impact in terms of guessing how much the slump in oil prices and drilling will affect the state’s economy.

Employment – the study calculates the petroleum industry provides the following jobs in the state during 2013:

Drilling costs – Table 14 provides the following data for the average cost per well completed which is in real dollars, not constant dollars:

Those are the raw numbers in the graph at the top of this post.

A few other articles discussing the report:

Superb resource. If you read all the way to the end of this post, you will really want to get a copy of the report, read it, and hold on to it.