A few articles on the shale revolution: scale of layoffs, improving efficiencies by drilling companies, and China scraps a shale gas project.

3/16 – Forbes – Itemizing the Oil Bust: 75,000 Layoffs and Counting – Article reports on a tally given the author by an insider of the known layoffs in the oil & gas industry. Insiders tell him that stacking a rig costs 40 jobs. Based on the rest of the article, I think that is direct jobs.

3/23 – AP at Bakken.com – US drillers scrambling to thwart OPEC threat – Article is full of reasons you might want to think twice before making a large bet against American ingenuity. When oil is at $100 and when companies were pushing to secure all their leases by production before the options ran out, using every subtle technique available wasn’t important.

Look at some of the techniques available now. Anything that improves recovery over 5% of 8% will have a huge payoff.

Engineering wizards are using the sensors and math models of deep water drilling to better calculate where the oil is.

Imaging technology allows engineers to see cracks before the drilling to determine exactly how to steer the drill. Imaging allows looking at the cracks after the fracking is done to see how close another well can be drilled without siphoning oil away from an existing well.

For a several year old well, refracking can return production back to the initial levels. Service companies are dropping their rates, so they can keep business.

Drillers are focusing on the most productive locations and the places they know best in order to get maximum efficiency instead of maximum production.

3/22 – Trib Live – Drillers’ new techniques, experience cut well costs, boost yields – This article is in the don’t bet against American ingenuity category. Results seen by Range Resources Corp’s drilling for gas show what is going on in the industry.

They drilled two new wells in a section where they have five producing wells. Output in the first year from the new wells was 53% higher than the previous wells. New techniques were used; the one item mentioned was punching more perforations. The two new wells had longer laterals but the cost was $580K lower.

Rigs and the crews to run them are rented on a daily basis. Picture what this drilling time does to the rental costs and then what it does to the cost of drilling a well:

Here is a very rough picture of what that efficiency gain looks like: 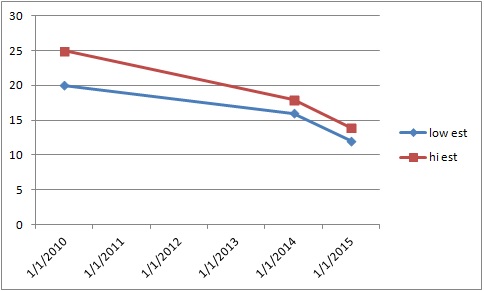 Also keep in mind the daily rental prices in 2015 are lower than in the past. Make your own guess for what the combination of faster drilling and lower per-day rates do to total cost.

Several factors enter into both cutting this project and the assessment that minimal amounts of shale energy will be released in China. The drop in crude prices is a major factor. Seems to me the more important factors are the other items mentioned in the article: