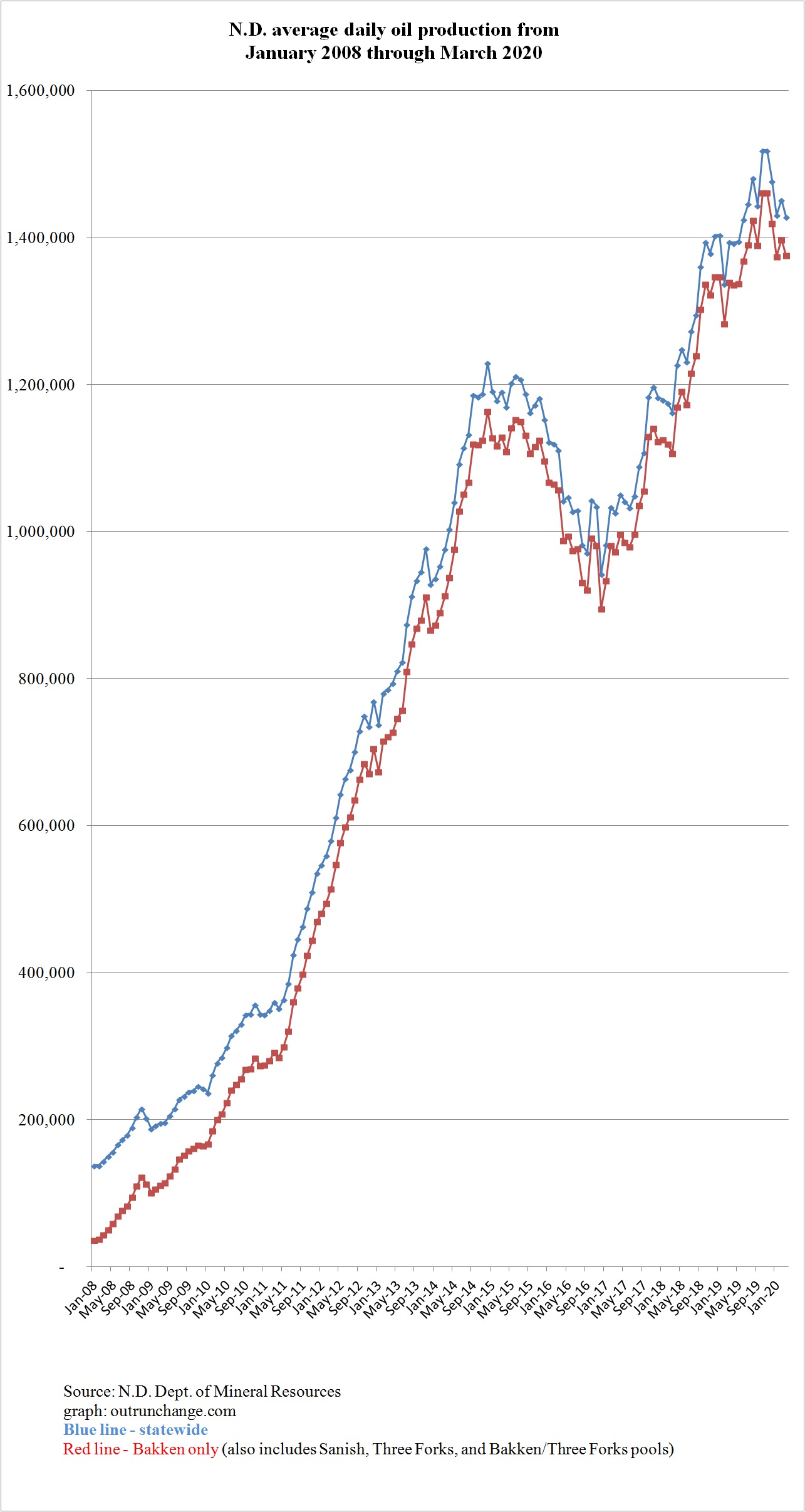 Production data in North Dakota is routinely released on about the 15th of each month reflecting data for the second previous month.  So the info just released on May 15, 2020 reports the March 2020 activity.

The radical drop in price due to the demand shock and supply shock will show up in production data for April, expected to be released about 6/15/20.

A few indicators of the radical contraction of the oil industry in the state can be seen in the drop of completion crews from 25 to 1. That means there won’t be many was completed in the very near term.

The number of drilling rigs has been in the mid-50s to mid 60s since the beginning of 2019. The rig count dropped to 35 in April and is currently 12. Mr. Helms said he has heard from industry sources saying there will be a drop of another 4 or 5 more rigs before the count starts going up. That suggests the rig count will drop from the mid-50s to about 7 or 8.

I thought about revising my standard graph, perhaps dropping off data prior to 2012 or 2013.  With the expected drop in production, that info will likely still be relevant.

5/4/20 – Reuters – “Like watching a train wreck”: The coronavirus effect on North Dakota shale oilfields – The harsh demand side and supply side shocks on the oil industry have had dramatic impact in North Dakota. Worldwide demand for oil is estimated to have dropped by 30%.

Many US producers are looking at prices below their production costs. Many are closing in their wells.

Estimated costs of breakeven across the Bakken field is below $47 per barrel.

Article says recent price per barrel is running about $14. Ouch. See worse info in graph below.

Continental has reportedly reduced their production by 95%. Oasis is stopping all drilling. Hess is stopping five of its six rigs.

Article says state officials expect there will be continued shut-ins of oil.

Many producers are asking the state to declare continue production is “economic waste.” Declaration if made would allow producers to stop producing oil without losing the lease on the land.

The alternative is to claim “force majeure” and stop production on the basis that economic conditions are beyond control of the producers. My guess is such a claim would probably prevail but obviously is far riskier than the state declaring further production is “economic waste.”  The force majeure position is arguable while the economic waste position would be legally clear.

The collapse in prices can be seen in the following graph:

The rapid drop in rig count is stark:

Well completions and new production are going to collapse.

Production is going to shrink, not only because of drilling activity screeching to a halt but many more wells are going to be shut in.