Here are four articles providing a bit of background on what’s going on in Bakken.

You have likely noticed I have long relied on The Million Dollar Way for my education on oil in general and Bakken in particular. Just look at the source for the following four articles. That makes it sorta’ cool when on 3/22 MDW recommended my post Scratching my head at the geopolitical impact of fracking. Thanks for the mention!

2/19/17 – The Million Dollar Way – EURs – Bakken 2.0 – EUR means Estimated Ultimate Recovery, which is the total amount of oil expected to be extracted from one specific well.  Article says the EURs in Bakken were 300K early on. At the point I started paying attention, the EURs were in the 500K range with possibilities of 1,000K.

Article says Mike Filloon has been talking about 1.5M instead of 1.0M.

END_OF_DOCUMENT_TOKEN_TO_BE_REPLACED

In Behind the Black’s favorite phrase, the competition heats up. Check out the news just this week for Blue Origin becoming a very serious player.

3/7 – Florida Today  Blue Origin books first New Glenn launch contract – Eutelsat Communications has booked the first launch on the New Glenn rocket from Blue Origin. First launch is expected in 2021 or 2022, which is only four or five years away.

END_OF_DOCUMENT_TOKEN_TO_BE_REPLACED

Just watched the recovery of a Falcon 9 booster. I missed the launch. Very cool video from the on-board camera as the booster descended through a cloud bank and landed dead center on the pad.

This mission, CRS-10, will deliver over 5,000 pounds of supplies to the International Space Station. Two really cool things. First, a private company providing supply runs to ISS is a thing. Second, it is almost routine to recover the first stage.

END_OF_DOCUMENT_TOKEN_TO_BE_REPLACED

Oh, by the way, the geology wizards just discovered another twenty billion barrels of recoverable oil where the wizards knew something existed but had no idea how much.

Twenty billion barrels. Billion, with a B.

11/15 – Star-Telegram – Permian’s Wolfcamp formation called biggest shale oil field in US – Estimate from USGS is the Wolfcamp formation in the Permian Basin holds 20 billion barrels of oil. There are four layers of shale that make up Wolfcamp. That puts this find somewhere in the range of three times the size of the entire Bakken formation in North Dakota.

END_OF_DOCUMENT_TOKEN_TO_BE_REPLACED

If you want to take your mind off the depressing news appearing on the front page of every newspaper every day, stretch your brain to consider the idea of mining asteroids for raw materials to build and fuel spaceships.

11/2 – Visual Capitalist – There’s Big Money to Be Made in Asteroid Mining – The theory is that an entire class of asteroids (the X-type) were once a large asteroid which has gone through several collisions which tore off most of the material leaving a very dense core of valuable metals.  One particular X-type asteroid is thought to hold more platinum that has been mined from planet Earth throughout all history.

The real payoff would be asteroids out in the asteroid belt between Mars and Jupiter. Resources there are staggering.

END_OF_DOCUMENT_TOKEN_TO_BE_REPLACED

As a bonus, a cool video on how train wheels are made.

Check these out as a refreshing break from the otherwise oh so depressing headlines.

10/19 – Reason – University of North Dakota Offers Class on Starting Your Own Drone Business – Course will have three parts. First, getting pilot certificate and studying FAA regs. Second, studying state of the industry today. Third, develop a business plan for a drone business.

END_OF_DOCUMENT_TOKEN_TO_BE_REPLACED

The number of private sector companies working to develop commercial exploration of space is amazing, as is the progress they are making. A few fun articles:

10/5 – Popular Mechanics – Blue Origin’s Rocket Test Just Went Better Than Anyone Thought Possible – Blue Origin just successfully completed the crew capsule escape test. The capsule’s emergency rockets fired 70,000 pounds of thrust off angle to the flight of the booster to separate the capsule from the booster.

Speculation on Twitter yesterday is the off angle push would topple the booster and require its destruction.

Instead, the booster survived the capsule’s escape, continued climbing to over 200,000 feet, fell back to earth, and successfully recovered two miles from the launch site.

Check out the video. Jump to the 1:07:00 mark for the launch and escape. Watch another five minutes for the astounding recovery.

Amongst the other fabulous details, keep in mind the camera is tracking the booster at 200,000 feet, down through 100,000 feet, all the way to the ground. Amazing.

In contrast to the horrible news mentioned yesterday from Venezuela, consider the the amazing news from the open frontier of energy production. The benefits produced by fracking just don’t seem to stop.

9/23 – The Million Dollar Way –Update On The Bakkan – Lynn Helms – A few highlights in the article from a radio interview I found particularly fascinating:

9/23 – The Million Dollar Way – FAQ: How Much Oil Can One Reasonably Expect That A Bakken Well Will Produce Over The Lifetime Of That Well? – Astounding information.

END_OF_DOCUMENT_TOKEN_TO_BE_REPLACED

After spending several years trying to get my little brain wrapped around energy issues, I’m to the point where I can interpret news reports and figure out for myself what to believe and what reports are just blowing smoke.

Consider the two following articles as illustrations of an article to believe and one that, um, well, ought to be taken with a large grain of salt.

10/2 – Wall Street Journal – An OPEC Output Cut Not Likely to Alter Oil Imbalance – Author cites “many” analysts who think that OPEC cutting production by a mere 700K bopd is not a large enough cut to resolve the oil oversupply, nor will the cut take place quick enough to have any impact.

Previous expectation was oil demand and supply would balance out by the end of 2016. Now the guessing is it will take until mid-2017.

The money quote is from Daniel Yergin (so you know my perspective, I have learned to pay close attention to him anytime he is mentioned):

END_OF_DOCUMENT_TOKEN_TO_BE_REPLACED

9/29 – Space.com – Feasible or Fantasy? SpaceX’s Mars Plan Draws Expert Reactions – Author pulls in a variety of initial reactions to SpaceX’s outline of how to get colonists to Mars. My summary of comments is the plans have a lot of technological, funding, and timing hurdles to clear. In addition, a lot of work needs to be done to develop how the technological, food sourcing, economic, and energy systems would work on the planet to support long-term residency.

One hurdle has already been cleared – the technology for a soft landing on Mars is already in place as demonstrated by the successful recovery of boosters.

END_OF_DOCUMENT_TOKEN_TO_BE_REPLACED 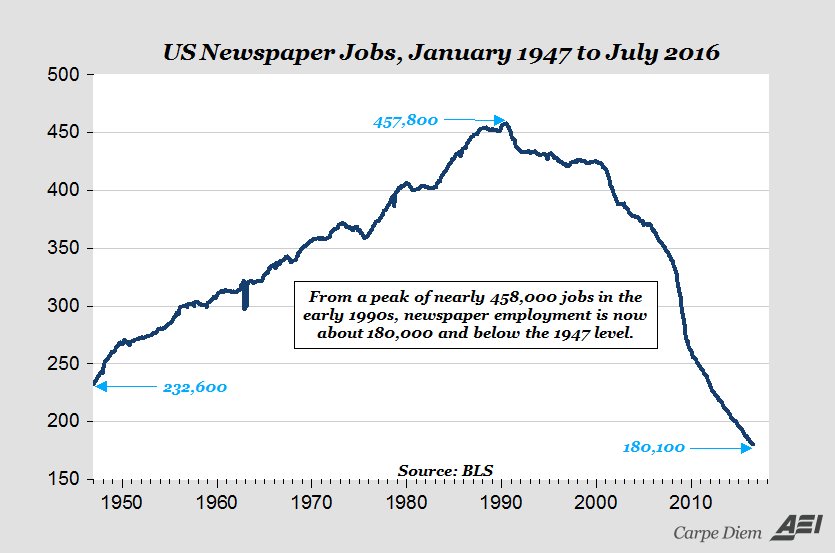 If you want a picture of what utter collapse in an industry looks like, check out the graph above from Professor Mark Perry on employment in the newspaper industry.

Advertising dollars are doing the same thing. On 4/30/15, Prof. Perry published the following graph in his post, Creative Destruction: Newspaper ad revenue continued its precipitous free fall in 2014, and it’s likely to continue:

END_OF_DOCUMENT_TOKEN_TO_BE_REPLACED

The Technology Quarterly issue from The Economist for August 27, 2016 described the open frontier of space. Check out Remaking the sky. I think that’s behind their paywall, so you may need a subscription.

Here are a few cool things I learned.

A sudden light – Nice description of the SpaceX launch when they recovered a booster back at the original launch site. Puts into context what an amazing step it is to recover a booster.

The small and the many – There are four major players in the world of communication satellites: Eutelsat, Inmarsat, Intelsat, and SES.

The typical cost for SES satellites range from $100M up to $300M. The launch cost is in ballpark of $100M. At those prices the entire satellite industry is very risk-averse. I get it. You cannot take a big chance when somewhere between $200M and $400M is on the line.

Cubesats are revolutionizing the satellite world by dramatically reducing cost and risk. The cost to develop a cubesat is small. One launch can lift a lot of cubesats which drops the cost. They don’t have the power to last very long and don’t have any propulsion, with both factors making it cheaper to experiment and not as risky to something trying something new.

END_OF_DOCUMENT_TOKEN_TO_BE_REPLACED

A colony on Mars is no longer just a silly fantasy. It is now in the range of maybe actually possible.

SpaceX announced the outline of their plans for shuttle runs to Mars in order to populate a self-sustaining colony.

My summary of the concept

Here is my simple summary:

A booster rocket, standing 254 feet tall, will have 42 Raptor engines. The Falcon 9 in testing now is powered by 9 Merlin engines. The Raptor engine is three times as powerful as the Merlin. The booster will have thrust twice that of a Saturn V with ability to lift 300 tons into low-earth orbit.

END_OF_DOCUMENT_TOKEN_TO_BE_REPLACED

There is a reason the phrase “rocket science” is the standard reference point for something that is overwhelmingly difficult and deadly dangerous.

9/3 – Business Insider – SpaceX and NASA have released full statements about Thursday’s rocket explosion – here’s what they said – On September 1, a Falcon 9 rocket from SpaceX exploded on the pad during the loading of fuel for a standard test firing of the engines in preparation for launching a communications satellite for Facebook. The rocket and payload were both destroyed.

END_OF_DOCUMENT_TOKEN_TO_BE_REPLACED

Technology is advancing at mind-boggling speed:

8/30 – Wall Street Journal – Business-Drone Rules to Take Effect – New rules governing business use of drones up to 55 pounds go into effect this day. Previously, rules required all drone operators to merely register with the feds. New rules allow business use of drones, by licensed pilots, within line-of-site, during the day, with drones under 55 pounds.

Expect more rules to address flight beyond line-of-site, and how to operate when people are underneath the drone.

8/22 – TechCrunch – Drone startup Aptonomy introduces the self-flying security guard – Company has a drone loaded with cameras, lights, loudspeakers, including night-vision cameras. I am sure there will be microphones to pick up sounds and conversations.

It can be dispatched as a remote-controlled security guard.