Energy Information Administration sent this tweet a few days ago: How much of the total electricity generated in 2014 was from wind and solar?

Let’s do some math –

END_OF_DOCUMENT_TOKEN_TO_BE_REPLACED

Came across a helpful case study analyzing the economics of installing rooftop solar. This analysis is provided by a website whose owner is not readily identifiable. Keep in mind the purpose of this website is to gather leads which are provided to rooftop solar installers. Thus the goal is to sell rooftop solar.

You can find the analysis at How Much Do Solar Panels Cost.

The case study is designed for a typical household that is a customer of Los Angeles Department of Water and Power. (This is relevant because a subsidy from LADWP covers 25% of total cost.)

In this case, a 3 kW installation is designed to cover 5600 kWh of the household’s 8,000 kWh annual consumption.

Total system costs are usually in the following proportions: END_OF_DOCUMENT_TOKEN_TO_BE_REPLACED

The California Public Utilities Commission approved a plan to dramatically change the pricing of electricity for residential users in the state.

Since we’re talking regulators who like regulation and complexity you have to be an accountant, engineer, or economist in order to understand this jumble. I think I get the basic picture.

Currently there are four different pricing ‘tiers’ based on how much electricity you use. The price for each level of usage is different. For example, our statements last summer gave an interpretive chart listing the various prices as motivator to conserve electricity: END_OF_DOCUMENT_TOKEN_TO_BE_REPLACED

END_OF_DOCUMENT_TOKEN_TO_BE_REPLACED 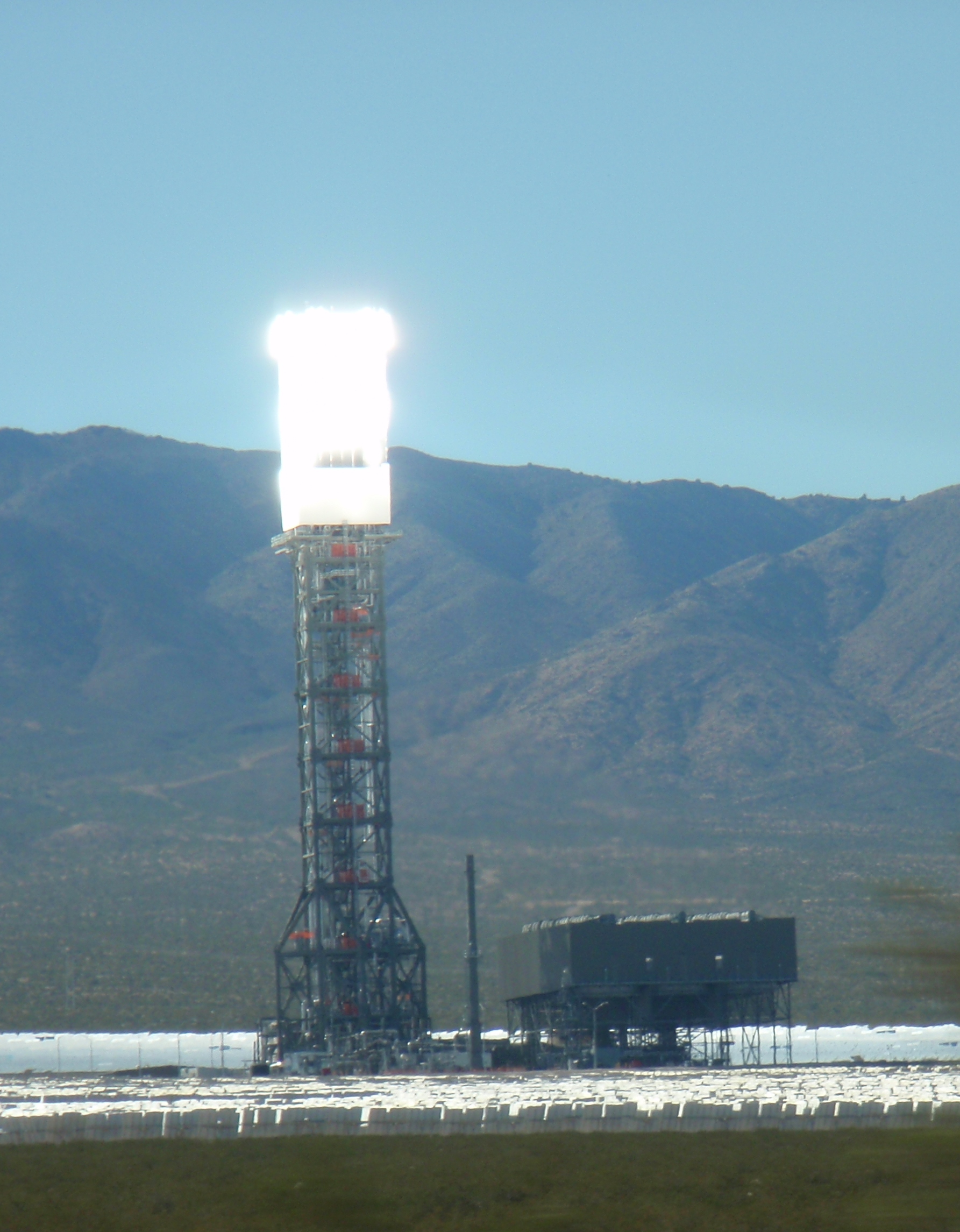 (Wing toaster portion of a wing-toasting facility in operation. Top of the tower is where the protected, migratory, and other birds get cooked. The white-hot section is around 750 degrees. Photo by James Ulvog.)

A detailed study of bird casualties estimates the Ivanpah Solar Electric Generating System kills about 3,500 birds a year. This is while it is only generating at 40% of expected capacity.

4/22 – Chris Clarke at ReWire – Solar Plant Likely Killed 3,500 Birds in 1st Year – The Ivanpah facility hired a firm to research the number of birds killed at the location. The number of fatalities is in a range between 2,500 and 6,700 with a point estimate of 3,504.

That is in contrast to the facility’s biologist’s official count of 695 dead and eight injured birds. That would be an average of 1.9 casualties each day. END_OF_DOCUMENT_TOKEN_TO_BE_REPLACED

The Ivanpah Solar Electric Generating System next to I-15 just south of the California-Nevada border is only generating 40% of the expected electricity while at the same time killing a lot more birds than officially reported.

6/12 – Wall Street Journal – High-Tech Solar Projects Fail to Deliver / $2.2 billion California project generates 40% of expected electricity – The Ivanpah solar-thermal plant in the Mojave Desert has been open 15 months. I think it was in testing for several months before that.

It was supposed to deliver over 1 million mWh a year but is only running at 40% of that level according to the article.

Article says offered causes include a lot of equipment breaking (even though it is only around 18 months old). They are still working their way down the learning curve with plenty of on-the-job learning on how to run the plant.

As I’ve mentioned before, they were planning to use natural gas to run the facility for an hour a day to get it going before the sun power really kicks in. They are having to use four times as much natural gas to get the plant started in the morning.

Most entertaining excuse offered for poor results is there’s not enough sun. In the Mojave Desert.

For the last 15 months it’s been more cloudy than expected.

In the Mojave Desert.

END_OF_DOCUMENT_TOKEN_TO_BE_REPLACED

I’ve seen comments that rounded to the nearest whole percent, solar power provides 0% of our electricity.

Finally found a way to test that data.

The U.S. Energy Information Administration has an Short-Term Energy Outlook report which has a data tab.

Figure 25 shows the sources of electricity generation. In thousands of megawatt hours (that would be gigawatt hours) for 2014 and 2015: END_OF_DOCUMENT_TOKEN_TO_BE_REPLACED

Fossil fuels create tremendous prosperity. Renewables can’t. Maybe somewhere someday something will be invented that can do so, but not today.

3/27 – Prof. Don Boudreaux (of Cafe Hayek) at Wall Street Journal – Fossil Fuel Free Is No Country for the Poor – Article points out a number of filthy rich people want a zero carbon emission world in 35 years. Currently all renewable energy provides around 10% of what we use in the US. Dropping the 90% of energy provided by fossil fuels would collapse the economy.

I have seen subsistence agriculture in operation during my very brief visits to Africa and Indonesia. I do not want to go there.

My father and his siblings grew up chopping wood to heat the house. Grandma used wood to cook food. My grandparents used a couple chunks of coal in the stove at night so a tiny fire would remain in the morning to get the wood started.  I do not want to go there either.

Yet that is what the superrich want for the poor of the world.

Look at what these self-appointed experts wish for: END_OF_DOCUMENT_TOKEN_TO_BE_REPLACED

Here are two more articles pointing out the risks to the electric grid and economic destruction of rooftop solar. Didn’t realize how big a mess I would find when I started this series of posts!

4/18 – New York Times – Solar Power Battle Puts Hawaii at Forefront of Worldwide Changes – The huge increase in solar power generated from rooftops in Hawaii is creating instability in the grid across the islands. The capacity and output from homes is invisible to the electric companies, which makes it increasingly difficult to maintain stable power.

You can translate ‘risk’ as an increased chance of random spikes, brownouts, and blackouts.

END_OF_DOCUMENT_TOKEN_TO_BE_REPLACED

A few articles on what’s going on in Bakken:

5/5 – Dickinson Press – Stark County wind energy permit rejected – Previously mentioned 87 slice-and-dicers operated by Dickinson Wind LLC, a sub of NextEra Energy were moving toward construction. Project has a buyer for the electricity, which I’m slowly learning is one of the biggest hurdles to clear.

With one abstention, the Stark County Commissioners unanimously denied a conditional use permit. An outpouring of public complaints persuaded the commissioners to vote down the application.

A few more tidbits on the new batteries from Tesla I discussed here, here, and here. Accumulating the info here in case I go into more detail in the future.

5/1  Bloomberg News – SolarCity Taking Orders for Tesla Batteries Starting at $5,000 – You can place an order now for a Powerwall backup battery. The 10 kWh backup can be purchased for $7,140. Price for just the battery is $3,500, so the inverter and installation will run you $3640. Installation only runs about $1,500 I think, which means the inverter is running around $2,000. Need to add that into all of the previous calculations I made. That further reduces the economic value of batteries, solar, and going off-grid.

One of the most fun things about blogging is learning as you go. If you like watching an uninformed person slowly get informed, get a fresh cup of coffee, sit back, and enjoy.

(My math was off. Read to the end for my new calculation.)

To analyze the concept of home batteries and solar power, I’m looking at the concept from the perspective of going off-grid.

I found a few websites that provided some info on the solar array needed. I won’t list the specific sites to avoid causing any unexpected problems, like, oh, exposing commercial businesses to unwanted ridicule.

One site gave helpful tools to calculate how many panels are needed. To go off-grid and cover our actual electricity use last August would call for a 7Kw system. That would involve $18,000 of their panels plus $1,500 or $2,000 for an inverter. Installation and permits are extra.

END_OF_DOCUMENT_TOKEN_TO_BE_REPLACED

More comments on the nifty new battery for home use. Mentioned this earlier.

Tesla announced a new home battery product called Powerwall. A very cool idea. In spite of what you might think from reading my blog, I think this is a good idea.

It is merely the next step in a very long journey, but I can grasp the great idea. Someday storing electricity at home may be viable.

On the other hand, it is astoundingly expensive at the moment. On the other, other hand, that’s what happens at the front-end of breakthrough technology.

You can find more info on the battery at Tesla’s Powerwall site.

I’m going to stretch my knowledge, probably beyond the breaking point. Let me know if I slip a digit or miss a step.

END_OF_DOCUMENT_TOKEN_TO_BE_REPLACED

Still have more catching up to do on describing the damage caused by wind and solar power. Here are two articles on the economic disruption involved.

11/29 – Forbes – Levelized Cost of Electricity: Renewable Energy’s Ticking Time Bomb? – I don’t quite understand the whole concept, but apparently there is a new technique in circulation that cooks the cost of renewable energy.

The core error is based on the idea that there are several times a year when the cost of electricity goes skyhigh for a short time. Those peaks in prices are what makes the power plants profitable. If the electricity is not available at those minutes, the bottom line for the year suffers.